Why Asians are Better at Math 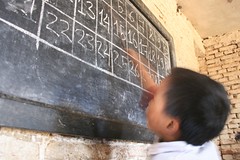 Dave Chen wrote a thought-provoking post entitled “Why Asians are Better at Math.”

He cites a BBC article which compares questions from British and Chinese math tests. Says the article:

A glance at the two questions reveals how much more advanced is the maths teaching in China, where children learn the subject up to the age of 18.

Dave uses his own experiences as an Asian American to speculate upon the reasons he believes Asians are better at math:

While I do agree with Dave’s assessment overall, I wonder if there is more to it? One article suggests that Chinese language and English language speakers calculate problems differently; that language seems to have a role in this. We could probably make this list miles long, but I think a key factor missing from the list is effort. I think Asians just try harder and put in more effort (than say Americans). Yes, that may because their parents expect them to, because the of the level of the curriculum, as well as the oppressive school systems… the end result is more effort put into math, in my opinion.

Heck, remove something as subjective as effort, what about time? I’m sure we could pull up studies about how many more hours Asians spend in school, doing homework, or even practice calculations. (Did you ever have to do practice calculations? My Mom used to buy math workbooks and made us do tons of problems on top of our regular homework.)

(On a sidenote, Dave’s post has 732 diggs as of right now and a ton of comments there… first comment: “Too bad math doesn’t help when you’re behind the wheel.” An Asian driver joke. Nice.)

I’m sure there’s more I’m not even thinking of right now. What other reasons contribute to Asian excellence in math?

As an Asian American, I grew up with parental expectations to excel in school. I did well in math, compared to my cohorts, but I always knew in the back of my mind that I wasn’t a math genius. It didn’t come easy and I definitely had to study for my grades. I knew that if I had been going to school in Taiwan; my “stellar” math performance in the US would land me at the back of the remedial class there.

I, for one, sometimes feel like a mathematical idiot, never having taken a class beyond calculus, especially since my major in college was based in the humanities. When I started business school, I struggled with basic calculations because I hadn’t used any math since high school (and any math I needed at work or otherwise was done by Excel or a calculator). It upsets me when people say “Oh you’re Asian, you’re good at math,” because it frankly makes me feel like some sort of fraud or maybe some sub-par Asian. I know I shouldn’t feel this way because I’m basically acknowledging some sort of Model Minority complex, but then I wonder, shouldn’t I expect more of myself? Clearly, I think to myself, if I had just put some more time and effort into math, I wouldn’t be such an math dummy.

I don’t think Asians are “inherently good at math.” I think most Asians work their asses off and develop their skills through good study habits and time and effort spent on math. Yeah, there’s that annoying math savant who can recite pi out to the ten-thousandth digit and tell you the square root of any number you name, but if you want to talk “ASIAN MATH SKILLS: NATURE VS NURTURE?” I would put a big ol’ “X” on the nurture column.

jozjozjoz is a taiwanese-american gal who lives and blogs underneath the hollywood sign and who doesn’t clean her fishtank unless the fish starts to do the backstroke. she is also able to leap tall buildings in a single bound, but cannot stop from bumping into door handles, cabinet doors, and anything else that protrudes or has a sharp edge. she does not run with scissors for this same reason. she can pet the fur off a dog but don’t ask her to go anywhere near a horse. or a moth. or a roach. her dealings with L.A.’s finest (aka the parking violations department) are legend, as are her giant sneezes. Other than the two too many joz’s, jozjozjoz is a perfectly normal, relatively sane individual who defies the odds, reaches for the stars, and carries moonbeams home in a jar. She’d rather be a fish… but not in her own dirty fishtank. http://www.jozjozjoz.com
View all posts by jozjozjoz →
This entry was posted in Lifestyles. Bookmark the permalink.