Asians *ARE* good at math and science 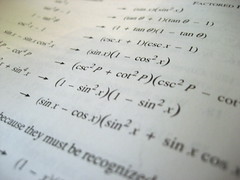 Well, I wonder if this blog title posting got your attention :-). In The New York Times’ article “Study Compares States’ Math and Science Scores With Other Countries’ “:

“American students even in low-performing states like Alabama do better on math and science tests than students in most foreign countries, including Italy and Norway, according to a new study released yesterday. That’s the good news. The bad news is that students in Singapore and several other Asian countries significantly outperform American students, even those in high-achieving states like Massachusetts, the study found. “In this case, the bad news trumps the good because our Asian economic competitors are winning the race to prepare students in math and science,” said the study’s author, Gary W. Phillips, chief scientist at the American Institutes of Research, a nonprofit independent scientific research firm.”

If you take a look at the full report: “Chance Favors the Prepared Mind: Mathematics and Science Indicators for Comparing States and Nations (.pdf)”, the report ranks (in order) these countries ahead of the United States in mathematics:

So it looks like Asian countries in general have done a better job of educating their students in math and science. (BTW – I wonder why China wasn’t included in the study – maybe there aren’t any “national” standards to compare against?) But something tells me that this isn’t necessarily the sole reason why Asian-Americans have been stereotyped of being good in math and science.