Keeping Bellies Buttoned Up in China 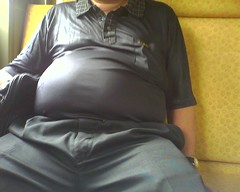 Do you really want to see what's under his shirt?

There are a lot of Asians in the gym where I work out, and I remember one in particular. He would do intensive cardio, and after getting hot and sweaty, he would try to cool off by pulling his shirt over his belly.   It wouldn’t be so bad to see his sweaty abs if he had a six pack, but he had only a one pack.  A fairly big one pack.

If that image disturbs you also, you are not alone.  Many in China don’t like it either.  This article from the LA Times says a campaign there is trying to stop men from becoming “bang ye” (“exposing grandfathers”), as those who expose only their bellies are called.  Apparently, many Chinese men would take off their shirts in hot weather, but a campaign to stop that practice left them to expose only their stomachs.  Some of the men tout the health benefits of doing this, but one Eastern Medicine practitioner disputes this.  “Exposing one’s belly has nothing to do with Chinese medicine’s theory about maintaining a person’s health.  People chose to expose their belly because they feel too hot in summer but feel embarrassed to take off their shirts completely.”

A comment on the article argues that since people don’t have problems when women can show their midriffs, why not men too?  I don’t know.  I changed my workout time, so I don’t see the “bang ye” guy anymore.  I don’t miss him or his one pack.