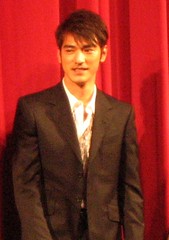 It seems that the once Prada model, now movie star, is getting back into the biz. Takeshi Kaneshiro will appear in the fall 2008 and winter 2009 campaigns alongside David Beckham in Armani’s underwear advertisements.

I’m not really sure how many guys will be buying Armani undergarments because of this pretty boy, but you can be sure that women everywhere will be going gaga over it. At least the ads, not so much the briefs.

Ben Hwang is involved in a number of online publications and also writes at his personal blog, LUX.ET.UMBRA. When he's not in the middle of starting companies and dreaming up new ventures, he is heavily involved in local community efforts. Currently resides in North Carolina.
View all posts by Ben →
This entry was posted in Current Events and tagged emporio armani, Kaneshiro, model, underwear. Bookmark the permalink.