Ask an Asian: What do you bring to an Americanized Chinese New Years Party? 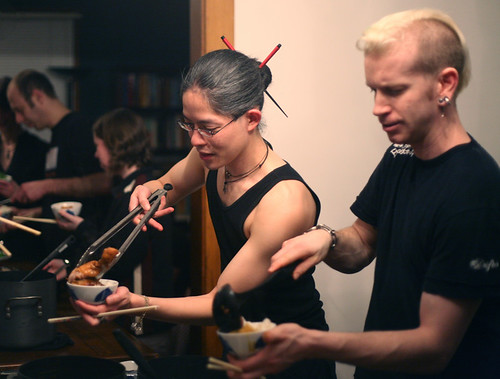 (Every so often, we here at 8Asians get e-mails asking for advice. This is NOT one of those e-mails, but my co-worker did ask me this question, to which I promptly told her to send this to the blog for additional blog fodder. What? I’m shameless.)

To my wise Asian friend Ernie,

Help! I’ve been dating a guy I really like for about a month. He asked me if I wanted to go to his best friend’s Chinese New Year party this weekend. As a nice Jewish girl, I’m not sure of the etiquette. Should I bring anything special? I usually default to bringing a bottle of champagne to a party. Is that OK in this situation or does Chinese New Year call for something different or unique?

For me, if this party were to occur over actual Chinese New Years last week, the proper answer is: “you wouldn’t be invited to this party because REAL Chinese New Year is about watching your family argue over petty shit, making you feel bad about yourself.” As this is Chinese New Years party is more Americanized, I told her to bring a bunch of tangerines for ironies sake, and if anyone gave her a hard time about it she could be all, BOOM DID MY RESEARCH BITCHES, and bust out the bottle of Olde English 800.

How would you answer Laura?

I'm the creator of 8 Asians and one of the editors. While I'm a regular blogger to the site as well, think of my role as Barbara Walters on "The View," except without the weird white hair. During the day, I'm a Developer for a major Internet company and live in the San Francisco Bay Area. I've also been writing in my blog, littleyellowdifferent.com, for seven years.
View all posts by Ernie →
This entry was posted in Ask an Asian, Lifestyles. Bookmark the permalink.