Is Michael Nava using a Chinese Name to Win Over SF Voters? 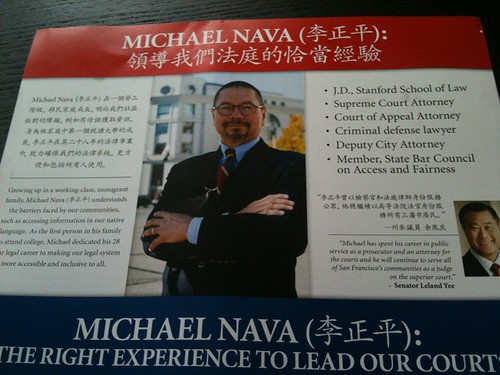 Mexican-American Michael Nava is running for judge in San Francisco, where ballots are printed in English, Spanish and Chinese, and I have the extreme fortune of getting Chinese voting literature. So maybe I shouldn’t be surprised that the candidate for judge has voting literature geared towards San Francisco Chinese voters with the endorsement from a sea of yellow faces, but he also has a Chinese name — Li Zheng-Ping — a stark contrast from the usual candidates whose names use a straightforward phonetic transliteration.

So why did he give himself the name of Lee?  Some searching at his website doesn’t reveal any Chinese heritage, and the cynic in me questions whether this is underhanded cultural marketing, playing to the “Chinese people will vote for another Chinese person at a voting booth” theory. It’s something San Francisco Chronicle columnist C.W. Nevius has wondered out loud as well, but I could be completely wrong; maybe he did some missionary work in Taiwan! If so, his host family sure gave him the perfect name to run for public office.

Maybe I’m being paranoid: what do you think? Do you think this Chinese name come from a place of truth or clever marketing?

I'm the creator of 8 Asians and one of the editors. While I'm a regular blogger to the site as well, think of my role as Barbara Walters on "The View," except without the weird white hair. During the day, I'm a Developer for a major Internet company and live in the San Francisco Bay Area. I've also been writing in my blog, littleyellowdifferent.com, for seven years.
View all posts by Ernie →
This entry was posted in Local, Politics, San Francisco Bay Area. Bookmark the permalink.