A Guide To A Buddhist/Chinese/American Funeral 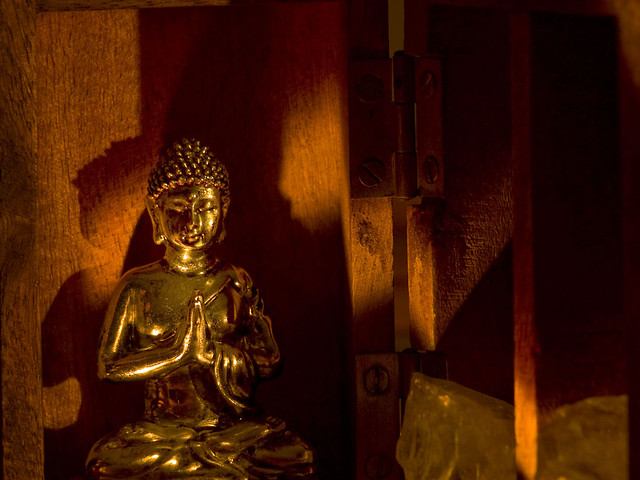 Author’s Note: I wrote the following blog post after my mom passed away in 2009. It continues to be one of the more frequently visited articles on my personal blog, and one that I thought deserved a broader audience here on 8Asians. You can read the original post here.

I’m writing this partly to help anyone who is wondering what one does when a Chinese/Buddhist parent passes away, and for the future, if and when Lauren may need to bury me. I don’t want her to have to go through all the pain and difficulty I had to, in order to plan a respectful burial for my dad and my mom. I spent this past week making arrangements for my own mom, Lauren’s grandmother, and I’ll talk about the arrangements relative to what we did for my mom. My mom was a practicing Buddhist, and a Taiwanese immigrant to the United States.

She passed away at 9:05 AM, with me by her side. We already had a Buddhist chant box by her side, as we had placed it there a few days earlier as a comfort to her. The chant box you get should be one that chants the phrase “Na Mo Ah Mi Tuo Fo.” If you can only find one that chants “Ah Mi Tuo Fo” that should suffice as well. Because she passed away at home (as did my dad), we were able to keep the body intact and did not move either of them for the requisite 8 hours. (If you have a nurse or health aide available, have them bathe and clean the deceased, if not have the funeral home do it later.) During the 8 hours, we had Buddhist monks and sisters chanting “Na Mo Ah Mi Tuo Fo” along with the chant box (once again, “Ah Mi Tuo Fo” is sufficient if that’s all you have). The people chanting will need to sit on either side of the deceased, no one should be sitting at the foot or the head of the bed.

In addition, if you haven’t already prepared for this, you’ll need to send someone one out to a Buddhist temple to procure a burial blanket or burial blanket kit. The blanket is typically white edged with a gold/yellow center that has been embroidered with lotus blossoms and possibly other symbols of good luck (including a swastika – a symbol used by Buddhists for good luck well before it was used for evil). A kit may also include a pillow case and a white sheet. The pillow case will go below the head the white sheet below the body (give the white sheet to the funeral home to place below the body, you do not move or touch the body during this time).

The eldest son or daughter (if there is no son) should cover the body with the Buddhist blanket. It should be the gift of the child to the deceased. Chanting should continue to go on while this occurs. Throughout the chanting, family members should go up to the deceased and let them know it’s okay for them to go with Buddha, that it’s okay for them to depart the human world, that everything is okay with them, and that the deceased no longer needs to worry or care for them in this world.

Typically, family members take turns chanting, as you will tire easily from this task. We took turns every 2 hours. Also make arrangements with the funeral home to pick up the deceased after the 8 hours has passed.

When the staff of the funeral home comes to pick up your loved one, make sure they know how the Buddhist blanket and pieces (if you have the kit) need to go with the body. Also request the chant box stay with the deceased and go with them. During the time the funeral home moves the deceased out of the home/hospital/location of death, you should not be watching them do so, make sure you step out of the room and ask that they let you know once they have moved the deceased to their vehicle.

The next step is to make the funeral arrangements for the deceased. Typically, Chinese do not like the idea of embalming, although it is becoming more popular as Chinese become more Westernized. Like my parents, I prefer not to be embalmed. There’s a lot to do to prepare for a Buddhist/Chinese/Western funeral.

You’ll need to select a date for the service. You may also want a visitation period. Because there is no embalming, visitation will probably be short and can even be scheduled for the hour or two before the service. You may also want to have a closed casket depending on the appearance of the deceased. If the funeral is more than 5-7 days after the loved one has passed, you will probably need a closed casket visitation and service anyway because of the state of the deceased. If this is the case, make sure you schedule a private visitation in the first few days so that you and any other close relatives get to say a private goodbye (this visitation also lets you check up on the funeral home that they have the deceased dressed as you wish and that they remembered to put the Buddhist funeral blanket and accessories on your loved one in the casket.

You will also need to schedule a date for the burial. Chinese typically do not like cremation as they believe they need their body for the afterlife, although as burial becomes more and more expensive, they are beginning to opt for cremation. Note to Lauren, I’ve already got a burial plot next to your Grandma and Grandpa. The burial can take place immediately after the service and is probably more convenient if you can schedule it that way.

Finally you’ll need to schedule either a lunch or dinner as appropriate to the time of the service and burial, to invite attendees of the service. You need to treat your relatives and friends to a last meal in honor of the deceased. Typically this is at a Chinese restaurant. If you want to adhere to Buddhist traditions, this should also be a vegetarian meal.

Things you will need to prepare for the service and burial:

First, call everyone who needs to know about the service and let them know date and time, and estimate how many will attend.

If you know 30 are coming you may want to prepare 50 of the following (make up your own numbers as appropriate):

White envelopes containing a piece of hard candy and a nickel – Each person entering the service should be given a white envelope. The candy is to sweeten the bitterness of their loss.

Red envelopes containing a quarter – Each person departing the service should be given a red envelope. This money should be spent on the way home from the funeral and is for good luck, as the person has just attended a funeral, which is generally considered bad luck. (Note: the white envelope/red envelope tradition comes from the Cantonese, but I really liked the idea and incorporated it into both my parent’s services).

I also prepared inserts in the programs explaining the envelopes as well as the Buddhist portion of the service.

If the visitation occurs before the service, you’ll need to make sure there are two altars prepared in front of the casket. The main altar (the larger one) should have a Buddha centered and elevated with an incense box in front. You’ll need to bring three bowls of food for offering to Buddha (one rice and two vegetable dishes), a plate of 5 oranges (4 square with a fifth stacked on top), and three cups of water. You’ll also need a white pillar candle on the altar. The smaller altar should be to the left of the main altar, and should have what’s called a “pai(2) wei(4)”. It’s a white tablet with the deceased’s name on it in Chinese with the Chinese word “pai wei” underneath. The food offering on this table should be one dish (rice and vegetable), one orange on a plate and one cup of water. There should be an incense box on this altar as well.

You’ll also need to order a wreath of flowers to honor the deceased. The one from the children go to the right of the casket.

Allow anyone who would like to make an incense offering to Buddha and then the deceased can do so during the visitation. Have the white candle lit before the visitation, so it can be used to light the incense for offering and make sure you bring incense to use. A large photo of the deceased should be placed to the left of the casket (more important if this is a closed casket ceremony).

You’ll need someone to officiate the service, preferably someone not related to the deceased (this is a Chinese superstition and considers it bad luck for family members to officiate).

Have the officiant welcome everyone to the Western portion of the service. Introduce anyone who is going to read a poem or play music etc. The eldest son/daughter should then give the first eulogy, and then invite anyone else who would like to speak to do so.

When you are at the burial ceremony, you can speak, but there’s generally little spoken in a Chinese burial. I chose a poem to read at my mom’s burial. Typically the funeral home will also ask pallbearers to discard their gloves and flowers if they were given them on the casket. Before the casket is lowered, everyone should turn away, as it’s bad luck to watch it being lowered. Afterwards, family members can remove their armbands and drop them on top of the casket. They can also place flowers if they wish on top of the casket.

Before the immediate family leaves the burial make sure each brother, sister, and child of the family receives a care package. The care package should contain a flashlight, a knife (swiss army knife or steak knife will suffice – buy new ones in package for this), a sprig of juniper and rock candy (regular candy if you can’t find rock candy). A note should be attached that explains the flashlight is for when the family member goes home. They should place the turned on flashlight outside the front door and step over the flashlight upon first entering their home after the funeral. This symbolizes lighting their way out of darkness. The knife is symbolic and represents severing the pain of loss. The sprig of juniper is a symbol of evergreen, and the candy is to sweeten the bitterness of loss.

That’s it. There’s a lot to do/remember, which is why I wrote it all down. It’s considered bad luck to do this, but I figure if I don’t Lauren will never know.

I'm a Chinese/Taiwanese-American, born in Taiwan, raised on Long Island, went to college in Philadelphia, tried Wall Street and then moved to the California Bay Area to work in high tech in 1990. I'm a recent dad and husband. Other adjectives that describe me include: son, brother, geek, DIYer, manager, teacher, tinkerer, amateur horologist, gay, and occasional couch potato. I write for about 5 different blogs including 8Asians. When not doing anything else, I like to challenge people's preconceived notions of who I should be.
View all posts by Tim →
This entry was posted in Family, Lifestyles. Bookmark the permalink.