Traveling Taiwan: Mountain Drive to Alishan (Part 20A of 24) As I began looking through my notes and pictures on the trip to Alishan, I realized that I couldn’t cover everything in just one post, so I’m going to share it as a sub-series (hence the part 20A–it will go up to F). It was just too much, and that’s really a reflection of how much there is to do on Alishan mountain. This place has got tea farms, cultural centers, old towns, historic sites, a million scenic spots, and all sorts of nature climbs and hikes. It would be a dream come true if I could spend a few months hidden up here, checking out a new attraction every day while spending nights writing back in a mountain cabin under the canopy of night forest and starlight. No way I would get bored. As a teenager on the Taiwan Love Boat program, they took us on a tour of Taiwan, and one stop was at Chitou bamboo forest (Xitou Youth Activity Center), which is also up in the central mountains of Taiwan, and I was so enchanted by the place that I wrote it into my novel as the gateway through which the main character enters another world. There is seriously something magical about Taiwan’s mountain forests. 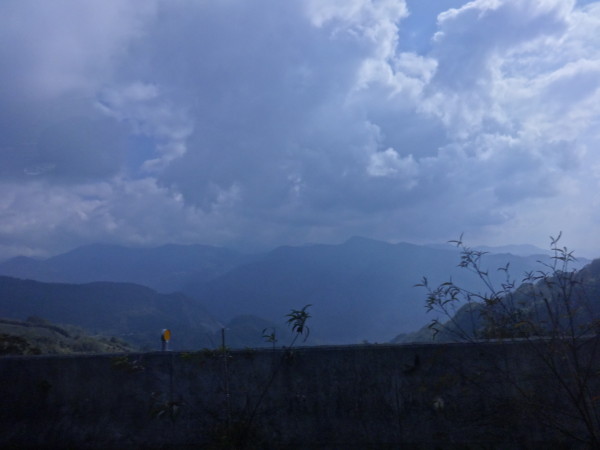 During the period of Japanese control over Taiwan, the Japanese discovered the rich forests of cypress trees on the Alishan mountain, and they built trains and railways to facilitate logging. Later, as the logging died down, the place drew more from tourism, but tourism along with high mountain tea farming and wasabi growing was still taking its toll on the environment, so Alishan was made into a national scenic area by the Taiwanese government.

Even though it would have been a longer journey, we had hoped to ride into the mountain on one of these beautiful classic Japanese trains and enjoy the scenic ride, but damage from the 2009 Typhoon Morakot has closed off those lines for repair. From what I remember reading about it, the earliest it will be ready will be 2016.

Nevertheless, our Taiwan Tour Bus drive up the mountain was both educational and full of beautiful views. All the photos above were from the windows of our private van. We learned from our guide that beetle nut trees have been illegally planted and have been invasively growing on the Alishan mountain areas. Many people go into the mountain area and harvest the wild growing trees for the beetle nuts, which is quite a lucrative little endeavor. Beetle nut is commonly sold all over Taiwan (including across the street from my paternal grandparent’s house) and is chewed as a stimulant. A lot of my uncles chew it, and growing up, I always equated it to chewing tobacco, which isn’t far off the mark since it’s often sold wrapped with tobacco for chewing. Luckily, the tree only thrives up to a certain height, so while it pretty much destroyed the existing environment of the lower parts of the mountains, at a certain elevation, around 2K I think, they thin out and disappear. Nevertheless, they pretty much dominate all of those lower area ecosystems. Next up, the lovely Alishan House resort. Tinabot is a writer, teacher, and ninja. She and her students write and publish their work. Her debut teen kung fu romance novel The Legend of Phoenix Mountain is available on Amazon and Barnes & Noble.
View all posts by tinabot →
This entry was posted in Environment, History and tagged Taiwan. Bookmark the permalink.