San Mateo Presidential Straw Poll – Where are you Asian-American?

Sunday afternoon, I attended the first ever San Mateo County Democratic Presidential Straw Poll. The guest of honor was presidential candidate Dennis Kucinich (my videoclip here on YouTube). There were over 750 who voted. 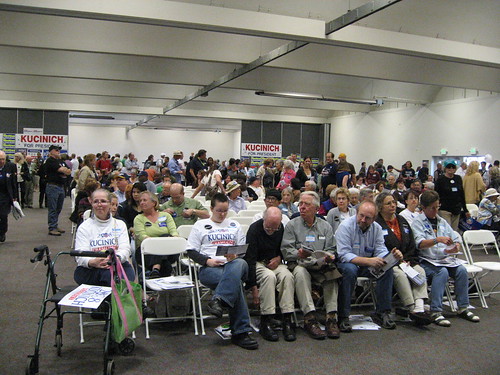 I think I saw about 20-to-30 Asian-Americans at the straw poll, which was pretty disappointing to see, considering that San Mateo & Santa Clara County is approximately 20% Asian, and San Francisco County is about 35% Asian. Where are the Asian-American citizens ? I did bump into a Huijun Ring, a Chinese-American who is running for Foster City’s City Council seat – she’s one of seven candidates running for three open seats this November. So if you live in Foster City – please consider Ring for office. In a county that is 20% Asian, it would be nice to see some representation in public office!