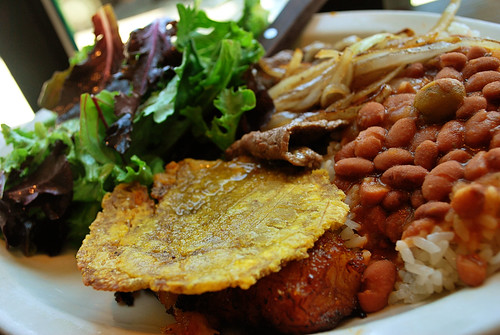 A few months ago, my cousin suggested we grab lunch at this joint in San Rafael called Sol Food. I had never had Puerto Rican food prior and was more than willing to give it a shot. As we were peering through the menu, I had noticed there was a dish that looked all too familiar to my own roots as a Filipina American called Bistek.

I grew up in a household where my mother was the primary cook. She would cook the traditional stews such as Kare Kare (Oxtail with peanut butter and vegetables), Adobo (Chicken or pork with soy sauce and vinegar), fry up some tasty Lumpias (eggrolls) and bake a mean Bibingka (rice cake.) On the days that she wasn’t up to preparing such a heavy feast, my family was relegated to numnuming on Bistek, which consisted of thin slices of sirloin steak, onion rings, garlic, kalamansi (citrus) juice and soy sauce. I was always excited to have Bistek with rice for lunch or dinner. It’s one of those meals that is so simple to prepare yet so tasty, it leaves you wanting more than you can chew.

When I saw it on Sol Food’s menu, I couldn’t help but want to try it out. Could it be that it was similar to the Filipino style of Bistek? When it was time to place my order, I had to ask what it came with. The woman at the register said that it came with red beans, rice, mafungo (plantain mash), salad and a plantain chip. I did not hesitate to add fresh limonada to my meal. After we were seated, my cousin and I got to chat about how the weather was so sunny and the other plans we had in store for the rest of the day. Ten minutes passed and the Bistek finally arrives. My cousin and I were gnawing at the beef and were pleasantly surprised that it was like how our mothers made it. I felt a sense of connection almost immediately between both cultures and of course, with our mothers. It’s funny how eating Bistek had a way of bringing me to a different place and taking me right back home all in one sitting.

Rosemary. Official 3rd person intro: San Francisco Bay Area, born and raised. Graphic Designer, Photographer, Quasi-traveler and Serious foodie. Always on the hunt for a new dish to try out. Takes photos of food pr0n and gets laughed at by friends for doing so. Check out her photography portfolio: http://rmamisayphotography.tumblr.com
View all posts by Rosemary →
This entry was posted in Food & Drink. Bookmark the permalink.