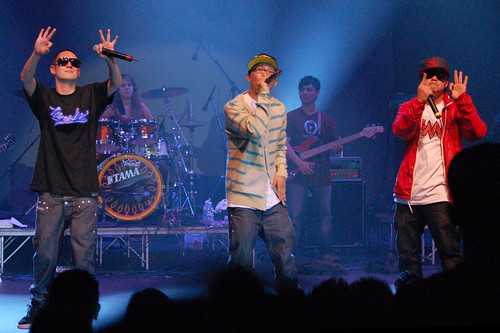 While I don’t know how the name of International Secret Agents came to be, I do know the powers of Wong Fu Productions and Far East Movement came together to bring Asian American artists to the mainstream.  And mainstream, indeed, with teeny boppers crowding the Palace of Fine Arts in San Francisco on Friday night. Aside from the unfitting formality of the Palace and teeny boppers with their flashing digital cameras and cell phones, the event was quite the hype.

I’m not going to lie, I didn’t know any of the artists prior to the event. That’s why I went; to learn more and dance some. And with my press pass in hand, I got the inside scoop.

It was a bit unsettling at first.  Who was the guy in the flashy gold jacket and where did he get all of that energy? Why were the guys in American Apparel clad wearing sunglasses indoors? They must think they’re cool. Oh goodness, how was I going to make my way pass the giant cameraman and not look like an ignorant fool?

I spoke with the creators of the event, the men from Wong Fu Productions, themselves. They’re nice guys, in their 20-somethings, braved the Asian stereotype and pursued their dreams in film. I asked if their parents knew what they were doing. They laughed and said “yeah, but probably not to this degree.” Indeed, it may be difficult to explain two sold out shows.

While in the press room, I couldn’t help but ask: If this is an event about inclusion and appreciation for Asian American artists, where are the women?

I was comforted when I took my seat in the audience, but only for a bit. Jessi Malay was singing a snip-it. Turns out she doing a sing-off with her co-host, who kept stuttering over his words and failing at bad jokes. During one performance, he “locked” his female co-host in the bathroom. I didn’t get it either.

Passion was good. He’s got a sweet voice and I’m a sucker for acoustic guitars, but I was sick of hearing covers. I wanted the OG. I didn’t understand that, especially when Paul Dateh followed with a Jason Mraz flow.  If I wanted to hear covers I could gone to a local bar or just sat in front of my macbook watching youtube.

It got worse. Wong Fu Productions videos came up, and oh, I was so disappointed. A clip from “Up in da club” played– amongst three male heads was one woman, the “cute accountant.” At this point, I found the creators’ work to be very telling of the concert’s production. It’s hard not to be angry because I met the guys and they seemed quite genuine with good intentions, and yet, I can’t help but be critical of their work. ESPECIALLY if their goal is to represent Asian American artists.

There’s so much potential. A dynamic female presence is a start. In the films and throughout the concert including the music from FM and Jin, were images of women on the projector.  Who those women were I have no clue. At one point, Jin does a free style about some Asian women, and he makes a comment to “us.” He says something like, “Ladies, it’s not all about looks. It’s about brains too. Right, guys?”  Hands down, Jin was my favorite artist of the night–for his ability to carry the crowd’s energy and his music, but c’mon. I didn’t want to be reminded that my goal in life is to attract Asian men.

The only women on stage were Jessi Malay and some dancers from Fanny Pak, who were great and also, not Asian. I have no problem with that except that I know so many Asian female dancers who would have loved to be on stage. And if this event was about inclusion for Asian artists, this could have been the perfect venue for them.

I just did another search on the International Secret Agents website and read their mission.. “because we have our own stories, skills and talents that go far beyond the dated stereotypical expectations” and “because we are moving together to accomplish a collective mission.”

ISA was an ambitious feat, and I commend them for that. I just think if we’re going to even attempt to represent a community of artists, cultures and stories, we should at least include half of that community’s population, and not by having them as back-up dancers or objects of desire, but as real agents telling their own stories.

Check out more coverage at Hyphen.

Although Connie Chung shares a famous journalist's name, she wants to forge an original path of her own. An aspiring world traveler, she has backpacked through Ecuador, campaigned in the Netherlands and served as a student ambassador in South Korea. Aside from majoring in Peace and Conflict Studies, Connie recently directed "The Vagina Monologues" at UC Berkeley. As a graduating senior, she is currently seeking employment..after learning how to harvest grapes in Australia and surfing in New Zealand this summer, that is. Explore the world of wonders with Connie at www.seeconrun.blogspot.com.
View all posts by Connie →
This entry was posted in Entertainment, Movies, Music, San Francisco Bay Area. Bookmark the permalink.