8 Questions for The Adobo Hobo 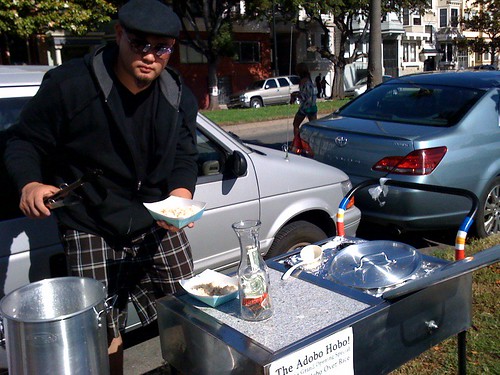 Compared to cities like Singapore, Taipei or even North American cities like New York and Toronto, San Francisco’s street vendor food scene is barely existent, unless you count the bacon-wrapped Hot Dog lady when stumbling out of bars in the Mission at two in the morning. Thanks in part to twitter — and maybe a faint nod to the twittering Kogi BBQ truck in LA — we’re beginning to see signs of life of street food in San Francisco, even if it means we have to be glued to technology to find it. Along with the vendors such as the Magic Curry Cart, Creme Brulee Guy and Sexy Soup Lady comes Jason, otherwise known as The Adobo Hobo; I was able to get a serving of chicken adobo at Dolores Park and ask him some questions.

“The Adobo Hobo?” How did that come about?
That started a week and a half ago, one Friday night. Amy [who manages TAH’s communication channels] came up with idea of starting a food cart, and we didn’t know what kind of product we would put out there. I brought up adobo since it was pretty simple and a lot of people are familiar with it. Her boyfriend — my roommate — came up with the name “The Adobo Hobo” … we picked up the cart and things just picked up there.

How did the whole idea of twittering the location beforehand come into play?
Amy and [her boyfriend] are a couple of foodies, checking out different places to eat. She’s been following the street vendors on twitter and decided it may be a good opportunity to do it as well.

Where are you from?
I live in Hayward; I’m from the East Bay – I grew up in San Lorenzo, Alemeda and Oakland. I might try to do something in the East Bay [down the line], but it’s a lot more street vendor friendly in San Francisco.

Do you have much experience with the street food scene? Or at least, eating street food?
There’s been a lot of street carts coming out. For years and years I’ve been going to the taco trucks in Oakland and getting burritos in the middle night or in two in the morning after drinking. [There’s the] bacon-wrapped hot dog lady and the creme brulee guy is pretty good as well. There’s been some communication between the vendors [via twitter]; they’re pretty welcoming [and they say] they’re glad I’m out there.

To be honest, not a lot of non-Asian people know about adobo is, or do they? Do people look at you all crazy and go “wait, isn’t that some Spanish thing?”
A lot of people will come by and say “oh yeah, chicken adobo,” and if they don’t know, I just say it’s Filipino comfort food. If they like it, they’re welcome to have it … if I get looks, it’s more for curious looks than for disgusted ones.

Since the Dolores Park or the Mission — where you’ve been serving food — isn’t exactly Daly City, what are some of the questions you get about the food? And have you changed your family recipe any to cater to the crazy hipsters?
Just a little bit. I made it a little bit healthier – I’m not going to say it’s totally healthy – low sodium soy sauce and I skin the chicken skin off before cooking it, which may be the most tedious part, skimming the fat off.

From the business perspective: How much of this pure money business versus a hobby, versus a way to just get some Asian food up in this?
Right now the main thing is getting the food out there in the scene — this is just for fun and a hobby; it’s not really a business, but it can turn into something, you know?  [Amy, who’s on the interview as well, jumps in here.] We’re all realistic that this isn’t going to last forever, and costs are really lenient but we’re having a lot of fun with this. Especially with the health department requiring people to purchase permits there may be some sort of crackdown, but we’re just trying to ride this out, I guess.

True or false: There’s never such thing as too much garlic.
When it looks like you have too much, throw in a little more, I say.

I'm the creator of 8 Asians and one of the editors. While I'm a regular blogger to the site as well, think of my role as Barbara Walters on "The View," except without the weird white hair. During the day, I'm a Developer for a major Internet company and live in the San Francisco Bay Area. I've also been writing in my blog, littleyellowdifferent.com, for seven years.
View all posts by Ernie →
This entry was posted in 8Questions, Food & Drink, San Francisco Bay Area. Bookmark the permalink.