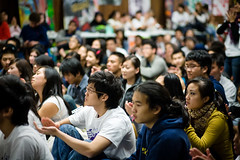 You know how your Chinese parents were like, “Carnegie Mellon? What is Mellon? GO TO UC DAVIS. CHEAPER AND MORE FAMOUS.” (What? Just my parents? Alright, then.)

Well, don’t expect that mindset to go away any time soon: according to a list compiled by the Center for World-Class Universities of Shanghai Jiao Tong University, Harvard and UC Berkeley were ranked as the two best colleges in the world. The factor used to determine “the best” in this Chinese study? The number of staff or alumni to receive Nobel Prizes or Fields Medals, among other factors. “Our view is – since we have really outstanding humanities here – that if there was a way of including humanities into the ranking, that our relative ranking might even have risen,” said the UC Berkeley chancellor. To which the Chinese respond: “HUMANITIES? HA HA HA THE CHINESE LAUGH AT YOUR HUMANITIES. DO YOU KNOW WHAT WE CALL THAT SHIT? ELECTIVES.”

I'm the creator of 8 Asians and one of the editors. While I'm a regular blogger to the site as well, think of my role as Barbara Walters on "The View," except without the weird white hair. During the day, I'm a Developer for a major Internet company and live in the San Francisco Bay Area. I've also been writing in my blog, littleyellowdifferent.com, for seven years.
View all posts by Ernie →
This entry was posted in Education. Bookmark the permalink.