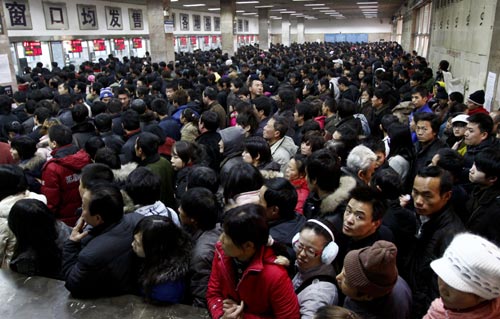 In 2010, I spent six months in Beijing battling the crowded mobs on the subway lines praying for a little space to breath on the central No. 1 red line. But that was nothing compared to when I wanted to travel to other parts of China. That was a whole different kind of battle – the buying rail tickets kind. Think about the lines at Disneyland or to get into a store at midnight on Black Friday, now make them longer, more crowded, more frenzied, more prone to pushing, shoving and cutting in line, and you’re getting towards the state of what it’s like to buy train tickets in China. It’s hard to understand because the U.S. has a crap-tastic railway system, but in China its the cheapest and easiest way to get from Point A to Point B. Virtually every Chinese person has a horror story about trying to get train tickets. And naturally, the train ticket buying situation is at its worst right around the Lunar New Year when the whole country takes a collective vacation to celebrate and more than 200 million people, the majority of them migrant workers, want to get home.

This year, China’s rail ministry tried to fix this whole ticket buying fiasco by creating a website to reserve tickets. Only it didn’t work. The volume on the site was so high that it crashed all the time (and by volume I mean that this is China and one day it got 1.4 billion hits) and the website occasionally charged people for tickets they didn’t get. Most of the people traveling long distances home for the new year are migrant workers and many of them don’t know how to use computers, let alone the internet. You can imagine that this might create problems – you can’t get your tickets on the site and you can’t get your tickets in person because they’re all sold-out from being on the internet. One worker, Huang Qinghong became a folk hero after he wrote a scathing note to the rail minister after his own personal difficulties trying to get tickets: “You guys sitting on couches in air-conditioned offices…and coming up with buying tickets online, have you ever considered our lives? Have you experienced the agony of buying tickets?” Luckily for Huang, the newspaper that picked up his story gifted him an airplane ticket home, but for others, the problems remain. Maybe the government learned its lesson from this debacle and will come up with an actual way to solve the ticket buying problem, I’m not terribly optimistic.

East Coast Chinese American. I like thick-skinned dumplings and hard-covered books.
View all posts by Lily →
This entry was posted in Current Events, Technology. Bookmark the permalink.