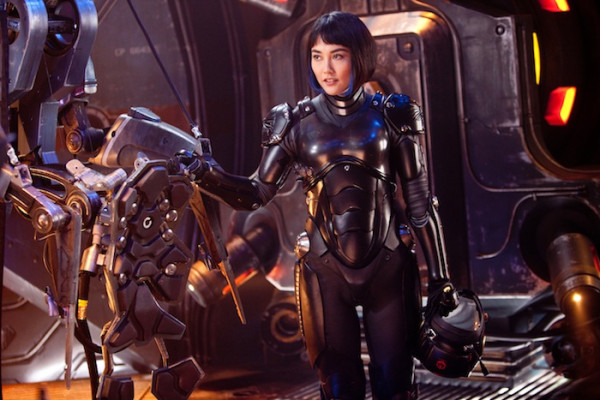 Japanese actress Rinko Kikuchi successfully crossed over into the American market with The Brothers Bloom and even snagged an Academy Award nomination for her role in Babel. Things hit a little closer to home with her character in the Kaiju-centric Pacific Rim. She plays Mako in a post-apocalyptic world where huge Godzilla-like monsters emerge from the sea and badass soldiers like herself have to pilot huge Jaegers (robots, not the drink) alongside hotties like Charlie Hunnam.

The movie is loud, huge in scale, and it is exploding at the seams with robotic and monster action – it has all the makings of a definitive summer blockbuster.

We had the chance to chat with Rinko about her role in the movie and what it was like battling all those gigantic monsters.

The Kaiju genre is a very old genre and it’s so distinctly Japanese. What has it meant to you to be in a film that is based around your culture?

I grew up with a lot of monster and robot movies since. I also like anime like Evangelion and Ghost in the Shell. In Japanese anime the little girl always becomes the hero so when I got his role, it’s a dream come true.

Guillermo del Toro said that he saw you in Babel and that was directed by his good friend Alejandro González Iñárritu. Did you see any differences and similarities in their directing styles?

I don’t think it’s possible to compare excellent directors. Alejandro gave the gate to my international career. I owe both of them. I owe so much to both of them.

The Jaeger suit you wear in the movie is pretty elaborate. How long did it take you to put that on?

Almost 45 minutes. It was hard.

Also you’re the only woman doing a lot of the physical stuff in the movie. You’re fighting, “drifting,” and doing a lot of physically demanding things. And based on what your costar Charlie Hunnam said, you seemed unfazed and were very zen with all of it. Was it as effortless as it looked?

When we were shooting in the cockpit, it was hard because our suit is very, very heavy. When we were attached to the control of the robot, also the mechanical arm, we put it in the arm and leg. It was so heavy too. It’s the most physically demanding shoot of my career. I would clear my mind to focus on my performance, because if I lose my concentration, I can’t survive in that I felt that it was a real fight.

When she steps into the cockpit for the first time, she gets freaked out, but eventually pulls it together. How did you go about making her a great, but vulnerable warrior?

Her parents were killed by Kaiju and that attack traumatized her. She was fighting a monster and her own demons. She wanted to get revenge.

What kind of training did you do for the movie?

Before shooting, I trained for almost two months: Boot-camp, weightlifting, running on the beach, martial arts, (and) eating healthy food. I’ve never done this before. I hate it, but I have to do that. My trainer was really, really hard on me. Everything is new to me. It was hard but I love Guillermo (and) I love his movie. I knew how I’m lucky (I was) to get this role. I just did it and had to get over it.

You and Charlie Hunnam have a big fight scene in the movie. How was that? Did either of you get injured?

I did sometimes, but look at Charlie! (He’s a) big guy! Actually, I grew up with a lot of samurai movies too, that’s why I wanted to be like the samurais. I have really special skills with Japanese swordplay. In real life, I can beat him up. (laughs)

Read more about Pacific Rim and how you can win a prize package from 8Asians!

Dino-Ray Ramos is a movie hobbit, social media swaggerist, pop culture junkie, smart-mouthed Asian American warrior, and a well-rounded inhaler of all things entertainment. After uprooting from Texas, he migrated to San Francisco where he shares his irreverent take on high and low brow aspects of culture. In addition to feeding TheFinerDandy.com he writes for AfterElton.com, Hyphen Magazine and the San Francisco Chronicle. You can also boost his self-esteem by following his musings on Twitter
View all posts by Dino-Ray →
This entry was posted in 8Questions, Movies and tagged RInko Kikuchi. Bookmark the permalink.