After hearing that one of my closest friends and his wife are big fans of ABC’s Shark Tank, I’ve begun to watch repeats of the show on CNBC, and new episodes. If you’re not familiar with Shark Tank, it’s an American reality competition television series that premiered August 9, 2009 and has aspiring entrepreneur-contestants make business presentations to a panel of “shark” investors to invest in (or not).

In the episode aired on Friday, January 9th, 2015, the Internet-mobile dating startup Coffee Meets Bagel pitched to the Shark Tank, where Korean American sistersÂ  Arum, Dawoon, and Soo Kang tried to convince the Sharks to make a $500,000 investment for 5% of the company – a pretty high valuation given that the revenue run rate was relatively low and not profitable.

Although Shark Mark Cuban was initially out of investing in Coffee Meets Bagel when the sister refused to nail down an exact number of users they had (they gave a range between 100,000 to 500,000), Cuban clearly liked some of the metrics, because at the end of the pitch, Cuban offered the largest amount in Shark Tank history to buy the company – and the sisters refused: 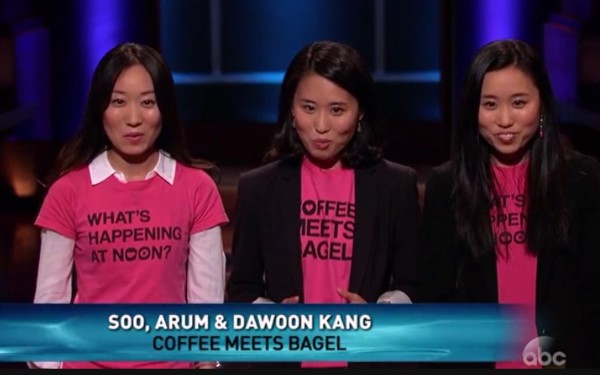 “So why did the Kangs turn down the largest offer in Shark Tank history?

“We see this business growing as a big as Match.com,” Dawoon said. “They’re becoming a billion-dollar-revenue company, and we think this model and the product has potential to be as big as Match.”

While growing to the same size as Match.com may sound like an ambitious goal, the Kangs had already secured $2.8 million in funding from investors including Match.com co-founder Peng Ong.Â The sisters, all of whom are in their early 30s and emigrated to the U.S. from South Korea as teenagers, have degrees from Harvard Business School, Stanford Business School, and Parsons School of Design. Each of the Kangs left a job paying six figures to found the company in 2012.

“It’s a newer, ephemeral version of Hot or Not, which is brilliant,” Cuban said. “

If you watch the episode, I think that Soo Kang was clearly in shock and looked like she wanted to take the $30 million. Hopefully Coffee Meets Bagel will be a success for the Kang sisters, or otherwise, they’ll look back and probably regret that they didn’t take the $30 million – I know I would!

I'm a Taiwanese-American and was born & raised in Western Massachusetts, went to college in upstate New York, worked in Connecticut, went to grad school in North Carolina and then moved out to the Bay Area in 1999 and have been living here ever since - love the weather and almost everything about the area (except the high cost of housing...)
View all posts by John →
This entry was posted in Business, Entertainment, TV. Bookmark the permalink.