As in 2012, the¬Ýofficial¬ÝDemocratic National Committee (DNC) Asian American & Pacific Islander ¬Ý(AAPI) events at the Democratic National Convention (DNC) are the caucuses, which are basically opportunities for various AAPI Democratic elected officials, appointed officials,¬Ýcommunity leaders, and guests to speak individually, or on a panel. And that was my first AAPI related DNC event I attended in the morning at 10 AM on Day 1. Since the Convention was four days instead of three days this year, there were two AAPI caucus days – on Day 1, Monday, July 25th and Day 3, July 27th. These caucuses were¬Ýopen to the public and you didn’t need any credentials (just grab a free ticket – and not like people were checking) to get into the Pennsylvania Convention Center where they were held – you just had to go through security.

A Facebook friend commented on exactly what went on during these caucuses. In regards to any official Democratic Party platform stuff or any voting, etc. Not really. Basically, the forum allows all attendees to see the various speakers and panelists speak and to see familiar faces and network with new ones and afterwards, meet and greet and work together in the future on like-minded issues.

The highest profile elected official I saw speak that I liked was Congresswoman Judy Chu (the first Chinese American woman ever elected into Congress)¬Ýas well as actress Constance Wu (of Fresh Off The Boat fame) on a panel discussion.

Congresswoman Chu outlined why AAPI‚Äôs should support Hillary Clinton for President, that Clinton has reached out¬Ýto the AAPI community, especially early on in her campaign. Clinton has also met with¬ÝCongressional Asian Pacific American Caucus (CAPAC), which Chu chaired, and knew CAPAC’s¬Ý‚Äì priorities and concerns, and understood issues concerning AAPI’s around immigration, higher education, etcetera. Clinton invited¬ÝCAPAC to speak at the Democratic National Convention (on Day 3 at 5PM EST on Wednesday, July 27th) – a historic first. Clinton had also attended and spoke at the¬ÝCAPAC Gala in Washington, D.C. And that Clinton had AAPIs on her staff, including Jason Tengco, AAPI Outreach Director and Olympian Michelle Kwan as Surrogate Outreach Coordinator – both of whom I’ve had the pleasure of meeting. Constance Wu discussed the issue of diversity in Hollywood, which she has been more local about and been getting noticed about. During the caucus, there were some Asian American Bernie supporters that briefly protested and then remained silently within the room. Not to my surprise, I saw my friend Michelle as one of the protesters, as I had been corresponding to her via IMs and texts. I hadn’t realized until later that Michelle had also been protesting at the California Delegates breakfast earlier in the morning (which I had also attended). With the California Delegates breakfast as well as this particular incident, I was wondering what kind of other Bernie Sanders supporters protests I would see.

Overall, the first caucus session was a good start from an AAPI standpoint and I got to see a lot of familiar faces and meet some new ones. 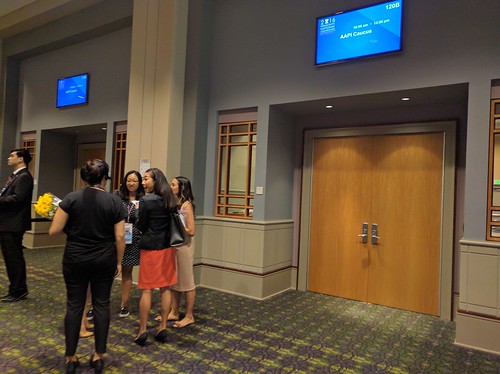