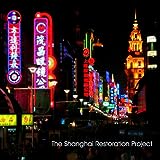 After surfing Arjan Writes (one of my favorite blogs about pop music, highly recommended, by the way) I stumbled across the the page for Dave Liang from the Shanghai Restoration Project. What, a Chinese American AND he makes electronica music? Sounds like a post for 8 Asians!

The UCLA Asia Institute has a great interview him, where he talks about Asian America and the art/music scene. (You think they wouldn’t ask a question like this? Of course they would.)

What’s funny, I think, is that Asian-American culture is very risk-averse. When you have options to become a doctor, a lawyer, or a businessperson, and have a good family and not worry financially, that’s a very appealing track to take. But in the world of arts, if you want to break through, you have to go through a huge period of struggle, and you have to go through not having that consistent paycheck that comes through.

In any case, I ended up downloading the self-titled album, a combination of traditional Chinese instruments and hip hop and electronica sounds off of iTunes and was pleasantly surprised. I mean, sure, I wonder if I like some of the tracks because of the novelty of a Chinese stringed instrument in the background, but certain tracks such as Jade Buddha Temple make for AWESOME head-bobbin, drive-home-at-night music. I’m also a big fan of “Pearl Tower,” an upbeat track with Craig David-ish vocals by Roopak Ahuja, one of the guys from A Capella group The House Jacks.

You can download the entire album in MP3 format at Amazon.com.

I'm the creator of 8 Asians and one of the editors. While I'm a regular blogger to the site as well, think of my role as Barbara Walters on "The View," except without the weird white hair. During the day, I'm a Developer for a major Internet company and live in the San Francisco Bay Area. I've also been writing in my blog, littleyellowdifferent.com, for seven years.
View all posts by Ernie →
This entry was posted in Entertainment, Music. Bookmark the permalink.