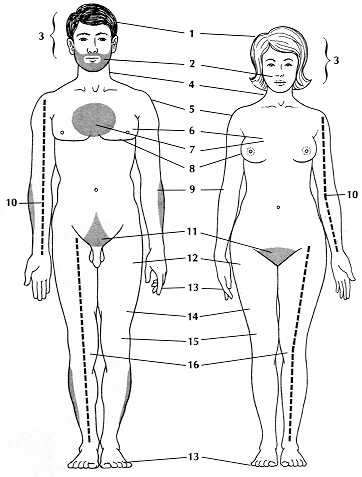 While doing research on Asians and body hair (Click here to read that article) I was fascinated to find that people on the Internet had a lot of interesting (mis)conceptions about Asian people’s pubic hair. Rather than trying to fit it all onto one hair related article, I decided to write a second article only about the hair no one really likes (or is it wants?) to talk about. But as an Asian American “journalist,” I feel that it is my duty to help set the record straight about this very important topic.

So naturally the first question is:

Do Asian people have pubic hair?

I’m serious, people actually asked this. Not just in this one instance either; there are dozens and dozens of people asking the same question. I randomly just picked one.

The reason people ask this is because of the stereotype that Asian people don’t have body hair (or at least less of it). If you follow that to its logistical next step, it would also mean that Asians don’t have pubic hair. Don’t think about it too much, it’ll give you an aneurism.

Do Asians have straight pubic hair?

(Answer) Some Asian people have straight pubic hair (as do many westerners), although curly pubes are much more common. The texture of pubes differ from person to person and does not necessarily coincide with race. I’m white and my pubes are straight as a board.

(My answer) Straight pubic hair? I didn’t even know they existed. Mine is curly, if you were curious. If you weren’t, too bad.

Do asian girls have the most pubic hair?

(Best Answer – Chosen by Voters) Not necessarily, but it’s usually beautifully soft, long and black – I think they are sexy beyond belief!

(My Answer) Where is male pubic hair shaving sexy? I’ll make sure never to visit there.

(Best Answer: chosen by Voters) Because they normally all have black hair on their heads, too! Black is a dominant color gene so any other recessive genes that may be present are not expressed.

(My Answer) I’ll answer your question with a question: Why is the sky blue?

I’m asian and have some pubic hair that is turning blonde? does any other asian girl have this issue where their pubic hair (which is normally black) turns blonde? I’m not all, but a couple I just find it odd because it’s the case for me. let me add that I’m 18 and a virgin. So it’s not a STD or getting old

(Best Answer – Chosen by Voters) maybe your nasty juice is bleaching it?

(My Answer) As a male, I respectively decline to answer this question. However, an Asian blonde pubic hair is worth a lot, it’s like a four leaf clover. Make a wish, it’ll come true.

Why are Asians against pubic hair removal? Do Asian people hate people that shave their pubic hair? Why are they against it? Is there something in their culture that forbids them from shaving?

(Best Answer – Chosen by Voters) It not a very high priority… the only person who would ever view it would be their spouse or significant other boyfriend or girlfriend. A majority of asians do not sleep around and would not engage in any sexual contact unless they had some type of commitment with the other person. With that commitment they would feel they could show that part of their body to that person without having to unnecessarily change that area of the body for aesthetical reasons. Though some girls may trim around that area to fit into a bikini bottom.

If a person was to have a job as a fashion model or actress… I suppose they may shave the pubic region.

1) No we don’t hate people who shave.
2) Read my above statement… it’s not high on the priority list.
3) No, nothing culturally demands that it be left untouched.

(My Answer)  The answer to this very dumb question is very well thought out and does not require me to add anything other than to note that this guy (loser) who asked this question asked the same question on numerous occasions. I assume he’s having some “personal” issues. I’d pay to be a fly in his therapy sessions.

Writer/Producer Koji Steven Sakai is the founder of Little Nalu Pictures LLC and the CEO of CHOPSO (www.CHOPSO.com), the first Asian English streaming video service. He has written five feature films that have been produced, including the indie hit, The People I’ve Slept With. He also produced three feature films, a one hour comedy special currently on Netflix, and Comedy InvAsian, a live and filmed series featuring the nation’s top Asian American comedians. Koji’s debut novel, Romeo & Juliet Vs. Zombies, was released in paperback in 2015 and in audiobook in 2016 and his graphic novel, 442, was released in 2017. In addition, he is currently an adjunct professor in screenwriting at International Technological University in San Jose.
View all posts by Koji Steven Sakai →
This entry was posted in Discrimination, Education, Health, WTF. Bookmark the permalink.