Justin Lin: “A Recipe for Success” 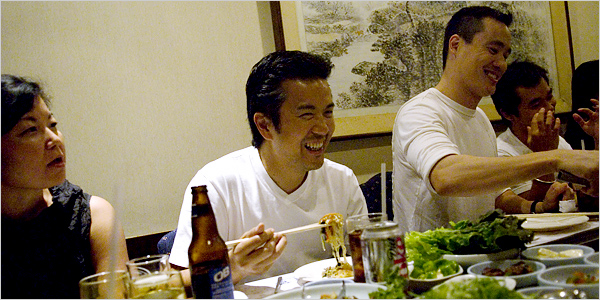 In today’s New York Times (yes, I love The New York Times…), there is an article on Justin Lin (of “Better Luck Tomorrow” fame) profiling what Lin is doing these days – which is getting ready to promote his “new” film that will be released in October (the film premiered at the San Francisco International Asian American Film Festival earlier this year), in the article, “A Recipe for Success“:

“With a movie that grossed $158 million under his belt [The Fast and the Furious: Tokyo Drift], Mr. Lin is using the windfall to take an 18-month break from the Hollywood swirl, mainly to work on his quirky low-budget film “Finishing the Game,” which was shown at the Sundance Film Festival in January and is opening in New York on Friday. Made for $500,000 (as much as “Tokyo Drift” could cost before lunch on a single day, Mr. Lin pointed out), “Finishing the Game” is a retro-mockumentary that chronicles the search to find Bruce Lee’s body double after the superstar died in the middle of shooting a film…The Tuesday-night dinner was part of a nine-month cross-country tour by Mr. Lin and two stars of “Finishing the Game” — Roger Fan (a Brown University graduate who switched from finance to acting) and Sung Kang (who has a stand-up comedian’s wit and a gangster’s demeanor). The three have put their mainstream careers on hiatus to discuss Asian-Americans and film with anyone who will join them.”

I'm a Taiwanese-American and was born & raised in Western Massachusetts, went to college in upstate New York, worked in Connecticut, went to grad school in North Carolina and then moved out to the Bay Area in 1999 and have been living here ever since - love the weather and almost everything about the area (except the high cost of housing...)
View all posts by John →
This entry was posted in Entertainment. Bookmark the permalink.