Reason 422 for why I would be a horrible Japanese man 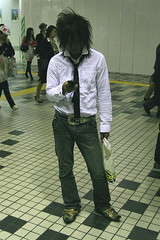 Besides the fact that I am neither Japanese nor male, I also have absolutely no desire to weigh 120 lbs. According to this article in the International Herald Tribune, the hottest new trend amongst hip, young Japanese men is to be slim, cute, and oh so crushable.

“It’s the men who want to be slender, vulnerable and protected. Young males between the ages of 18 and 30 make up the slimmest segment of the population and the ideal fashion weight as decreed by the apparel industry is 57 kilograms, or about 125 pounds, for a height of 175 centimeters, or 5 feet 8 inches. Many men try to adhere to that figure and some claim they want to be even skinnier.

Twenty-five-year-old Junichi Shirakawa, who works at the denim boutique 45 RPM, said that his goal is to get his weight down from 57 to 55 kilograms, although his height is 182 centimeters. “Being really skinny is essential, not just for fashion and work purposes but also because girls seem to go for thin guys,” he said.”

Okay folks, lets put this into perspective. Paula Radcliffe, the woman who just won the New York City Marathon, is 5’8″ and 119 lbs. Dude! She looked like a skeleton with skin stretched over it. But I digress.

One has to wonder what crazy psycho-social dynamics are propelling these young, Japanese men to aspire and conform to such a severe body image. Here are a couple of my theories:

While you guys ponder these theories and come up with your own, I’m going to take my 5’7″ 140lb culo to the nearest cupcake shop.

A 30something, 1.5 generation Korean-American/New Yorker who spends her day as an HR exec. specializing in corporate diversity & inclusion. I get to think about ways to make "The Man" less male, white, and straight. It's the best job in the world! When I'm not trying to change corporate America, I teach yoga and dabble in holistic health counseling. I have an MBA from New York University Stern School of Business and my undergraduate from the University of Michigan. Lesser known facts about me: I enjoy b&w film photography, training for endurance races, and making homemade jam. Other mindless observations can be found at http://itsbo.blogspot.com/
View all posts by Bo →
This entry was posted in Current Events. Bookmark the permalink.