The practicality of red envelopes 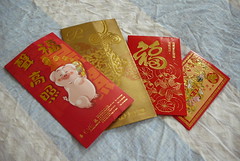 The holidays are upon us. And it got me thinking about some conversations I’ve had with friends and family. More so by those in the family that are more Westernized.

Here’s the thing. Westerners really don’t like to give money as gifts. I couldn’t even begin to tell you why, since I myself love receiving the gift of the green, but they just don’t. I’ve heard everything from the fact that it’s impersonal to …well, just not thoughtful. They’ll even go out of their way to give gift cards instead of cash.

Yet, something about the red envelopes always signified practicality to me. If your family isn’t as well off, the money could be used in a number of different ways from helping to pay bills, to buying groceries, to even a small gift. But it gives anyone the freedom to choosing what their gift would be and how it is used. There isn’t the consumer driven mentality that you must get someone something. Anything in fact. Why do you think there are such long lines after the holidays? Returns? Know the adage about time is money? Yeah.

Now it could just be a slice of my life that I take this from and share, but the gift that come in little red envelopes has always surpassed the ones that are more … material. Not because there wasn’t as much thought put into it or that either were less appreciated than the other. But from a practicality stand point, the freedom of choice to use it how you choose seemed to always be way better than keeping a sweater that you’re terrified to go out in, but too afraid to throw it out in case the giver ever wondered about it.

Ben Hwang is involved in a number of online publications and also writes at his personal blog, LUX.ET.UMBRA. When he's not in the middle of starting companies and dreaming up new ventures, he is heavily involved in local community efforts. Currently resides in North Carolina.
View all posts by Ben →
This entry was posted in Observations and tagged , chinese, red envelopes. Bookmark the permalink.