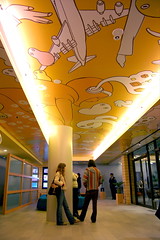 So I’m flipping through ReadyMade magazine when I come across a full page ad that simply has a giant “友!” in a bright yellow font and a website address – hoteltomo.com. Well, that’s interesting, I think to myself. And from the main description of the website, interesting is definitely a way to describe it:

Welcome to the Best Western Hotel Tomo, newly renovated and inspired by Japanese pop-culture. From the wall of televisions in our lobby to anime murals and glow-in-the-dark desk blotters in each guest room, this is a San Francisco experience like no other.

Once I realized I sounded like Comic Book Guy from the Simpsons and realized it was just an J-Pop inspired hotel, I started to lighten up a little. I’m all for aesthetically pleasing hotels that don’t remind me of The Shining, and Hotel Tomo’s interiors sure look pretty, with murals done by Japanese artist PCP. And, what? There’s a gaming suite with a Wii, a PS3 and a six-foot LCD project screen? Don’t think they have PS3’s at the Francis Drake.

I wouldn’t half mind staying the night there, honestly, but as I’m only going off a website and Flickr photos, I might need to swing by and walk around provided that I don’t get mugged traveling through the Fillmore. (Note to anyone from the hotel reading this: If anyone wants to give us a comp night, we will be more than happy to give you a full-length, totally biased review.)

I'm the creator of 8 Asians and one of the editors. While I'm a regular blogger to the site as well, think of my role as Barbara Walters on "The View," except without the weird white hair. During the day, I'm a Developer for a major Internet company and live in the San Francisco Bay Area. I've also been writing in my blog, littleyellowdifferent.com, for seven years.
View all posts by Ernie →
This entry was posted in Lifestyles. Bookmark the permalink.