LOLcat Guys Can Has Media Empire 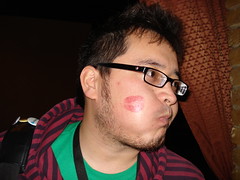 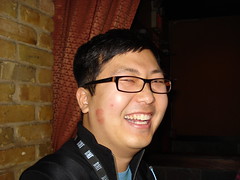 Greetings from Austin, Texas! There’s a huge movie, music and interactive festival taking place here this week, and as I’m a big geek, I’m here for the SXSW Interactive Festival, a tech convention which is a combination of bloggers, Web 2.0 folks, CEOs and artists. Among the hundreds of panelists this year, I had the opportunity to hang out (and sing drunken karaoke with) two of the remarkably down-to-earth guys behind the LOLcat phenomenon, Eric Nakagawa and Ben Huh of icanhascheezburger.com. Never heard of LOLcats? Oh, yes you have, especially if you spend any time on a blog, bulletin board or gotten any e-mail forwards from a kitten loving aunt. (It also explains this somewhat bizarre image.) Eric created the website as an inside joke with his girlfriend at the time; when the website started receiving exponential growth, he quit is day job as a computer programmer to work on the site full-time. Now he’s in Seattle running a website that has 2.5 million monthly users. There have been discussions about LOLcat vernacular. A book deal is in the works.

I'm the creator of 8 Asians and one of the editors. While I'm a regular blogger to the site as well, think of my role as Barbara Walters on "The View," except without the weird white hair. During the day, I'm a Developer for a major Internet company and live in the San Francisco Bay Area. I've also been writing in my blog, littleyellowdifferent.com, for seven years.
View all posts by Ernie →
This entry was posted in Entertainment, Technology. Bookmark the permalink.