Obama’s Race in America Speech: What does it mean for Asian-Americans? 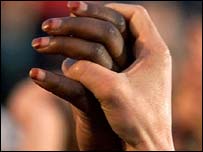 Not quite the watershed moment a la JFK’s speech on religion, Barack Obama’s speech on the state of race and racism in America had its moments. Was it just me or did any one else feel like he seriously under-emphasized the destructive and corrosive impact of racism on this country? Every sentence felt like a “Yes, but” moment. Yes, racism is bad but we can unit. Yes, racism has negatively impacted people of color but we shouldn’t let that influence our behavior. Yes, Dr. Wright was wrong for what he said but I still love him anyway. Yes, my grandmother was kinda racist but I still love her too. It all felt diluted.

I’m curious to know how other Asian-Americans interpreted and related to the speech. Reflecting a very blunt black-white perspective of race in America, the speech felt largely irrelevant to my experience of race and racism in this country. Sure Obama threw in the occasional ‘Asian’ and ‘Hispanic’ into the mix but by in large the simplified dynamics of poor vs. rich, black vs. white, privileged vs. disenfranchised felt clumsy and naive…and completely unrelated to the more complex issues and impact of institutionalized racism, unconscious bias, and micro-inequities that most people of color deal with on a daily basis. I guess that’s my beef with Obama’s speech. It felt like the speech was written to appease the fears of white America…the portion of white America that doesn’t have to deal with race on a daily basis. It felt pandering, as though Barack Obama was trying to say “We colored folks still confront racism on a daily basis but don’t worry, we ain’t mad at y’all. We just want to sing a song of unity, hold hands, and rise above it all.”

My conversations with friends and colleagues have confirmed some of suspicions. My white friends and colleagues uniformly found the speech “inspiring,” “brought me to tears,” “made me proud to support him,” and “healing”. Conversely, my non-white friends, for the most part, felt the speech “was okay,” “mixed,” “made some good points,” “could have gone further,” and “felt contrived”.

What do you guys think? Were you inspired or unmoved?

A 30something, 1.5 generation Korean-American/New Yorker who spends her day as an HR exec. specializing in corporate diversity & inclusion. I get to think about ways to make "The Man" less male, white, and straight. It's the best job in the world! When I'm not trying to change corporate America, I teach yoga and dabble in holistic health counseling. I have an MBA from New York University Stern School of Business and my undergraduate from the University of Michigan. Lesser known facts about me: I enjoy b&w film photography, training for endurance races, and making homemade jam. Other mindless observations can be found at http://itsbo.blogspot.com/
View all posts by Bo →
This entry was posted in Observations, Politics. Bookmark the permalink.