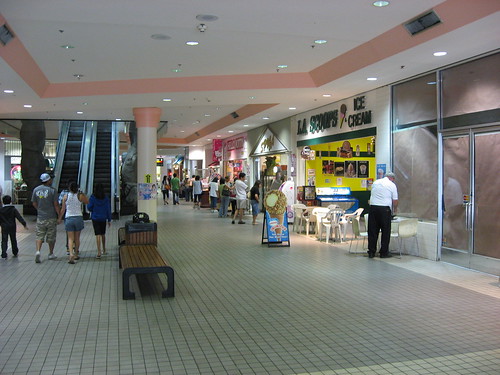 LA Business Journal posted an article today about the influx of Korean business owners snatching up property in the aging and not quite dead Little Tokyo neighborhood in Los Angeles.

Most recently, the Little Tokyo Shopping Center, which I can say is probably the largest retail-related building in the area, was bought by Korean-American investors.

So what’s next? While it’s not new that non-Japanese people and businesses have taken stock in Little Tokyo, this will be the first big development aimed at the Korean community who have been moving into the area.

Their plans call for a renovation of the shopping center to accommodate new tenants in three anchor spaces: a Korean market that’s about 30 percent larger than its counterparts in Koreatown; a full-service Korean spa with various herbal steam rooms; and an electronics retailer.

This is a little sad to me. The Mistuwa grocery store (previously Yaohan) has been a staple for the Japanese American community in the area. For as long as I could remember, my grandparents, parents and occasionally me (but only for Japanese pastries because I’m fat like that), have frequented the shopping center for all of their cooking/food needs. Granted, we could most probably do the same with a Korean market, but there’s nothing like having a giant Japanese version of Vons in the neighborhood.

Usually, developments that encroach upon Little Tokyo make me mad — but what can you do when it helps foster another (way larger) Asian community? To me, it’s such a historical area and further proof that the Japanese American population has been around for ages. I know there are other better Japanese neighborhoods around Los Angeles, but where else can you walk around a place where fellow Asians have been frequenting since the early 1900’s?

It’s just another sign that the Little Tokyo as we once knew it has slowly been dying away. Sad… but I hope they share the Korean BBQ.

I am a Japanese-American girl who was born, raised and is most probably stuck in traffic right this second in Los Angeles. I'm currently one of the co-editors of 8Asians and like to distract myself with good food, reading long books, playing video games, catching up on celebrity news, choosing my new new haircut and then writing all about it on Hello Moye and sometimes here on Twitter if I can get it in under 140 words or less. You can reach me at moye[at]8asians.com.
View all posts by Moye →
This entry was posted in Current Events, Food & Drink. Bookmark the permalink.