More Jeremy Lin, and Why Yesterday Was a Good Day for Asian Basketball Fans 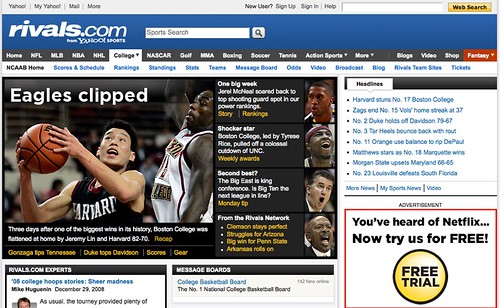 Wednesday was a great day for basketball, at least for Asian or Chinese fans.

Whether you think Taiwanese is the same as Chinese, or you think Asian or Asian-American, what do you think of when you hear the name of Jeremy Lin combined with Harvard? An Asian guy, majoring in the medical field or studying to become an engineer? how about sports? Martial Arts, or Table Tennis?

Not in this case. If you had the chance to checkout Yahoo Sports College Basketball’s front page or one of ESPN’s NCAA basketball headlines, you would have seen the name Jeremy Lin. And to answer all the questions that will come to mind… an Asian? An Asian-American? And he’s not 7 feet tall? Yes, he plays basketball and he’s pretty good.

Jeremy Lin of Harvard (every Asian parents dream, his parents must be really proud) who was previously named Harvard’s Player of the Week played a ranked team for the first time: Boston College, who had previously upset #1 North Carolina, ranked #24 in the ESPN/USA Today and #17 in the Associated Press Polls. Lin helped lead his team in a upset victory over Boston College, 82-70, finishing the game with an amazing stat line of 27 points, 8 assists, 6 steals, 2 blocks, and 3 rebounds. On the other end, he helped hold BC standout Tyrese Rice to just 4-10 shooting and 5 turnovers.

In NBA News, the night was also going good for other NBA/Asian/Chinese players.

Yao Ming (Houston Rockets) helped lead his team to victory over the Boston Celtics, 89-85. The Rockets were also without one of their superstar players, Tracy McGrady, who decided not to play back-to-back games due to injury and chose not to play vs Boston. The Rockets handed the Boston Celtics only their 2nd lost at home. Yao Ming finished with 26pts, 8 rbs, 4 assists, and 2 blocks.

Yi Jianlian (New Jersey Nets), previously coming off one of the best games of his career, had another solid performance vs the Memphis Grizzlies. Yi finished with 20 pts, 6 rbs, 2 steals, 3 assists, and 1 block as the Nets won 100-89. Hammad Haddabi of the Memphis Grizzlies was in uniform but did not play.

Rookie Sun Yue (Los Angeles Lakers) also got some playing time in the second quarter vs the Golden State Warriors. Lakers were without players Jordan Farmar, Luke Walton, and Lamar Odom due to injury. The Head Coach of the LA Lakers was quoted saying about Sun “He’s not ready yet, but he’s going to have to play. He’s just going to have to play because he’s called upon right now.” Sun Yue recorded his first NBA block tonight vs the Warriors. If you were watching the game, you could hear some fans — probably Asian/Chinese — cheering Sun as he missed his only shot attempt with a three.

Final Thought: Jeremy Lin is of the few, if only, Asian-American basketball players to have a great performance and lead his team in a upset win over a ranked team this season. He’s a solid player; will he make the NBA? Who knows, but his performance versus Boston College deserves much credit. Also great game for Yao Ming leading his team over one of the best teams in the NBA, even without T-Mac. Rockets have been plagued with injuries this season, so any win for the Rockets is crucial for them if they want to have a good spot in the standings.

Yi Jianlian has been struggling to stay consistent in his second season in the NBA. Head Coach of the Nets, Lawrence Frank, acknowledged during the pre-game that his team is young and it will take some time. In my opinion, Yi just needs to keep staying aggressive on both the offensive and defensive ends of the floor; he has to face the controversy of both his age and the attention from the All-Star votes, but everything eventually falls on his performance. It should also be noted that Yi has been playing lots of basketball because he’s obligated to not only play for his NBA team, but also the Chinese National Team — hopefully Yi receives time the summer to work with the special coaches and trainers, as the off-season is a time many other NBA players use to improve on their skills. As for Sun Yue, who doesn’t have the high expectations of being a superstar from China or a NBA lottery pick like Yao or Yi, hopefully he can continue to learn and take advantage of the training he’s receiving, and hopefully the results are a solid future career in the NBA.

My name is Phil. I’m from Southern California, just trying to survive everyday life here working and doing whatever I can. I’m a fan of basketball and other various forms of entertainment. Even though So Cal has a lot of Asians, surprisingly I didn’t grow up around many Asians/Asian-Americans but thanks to the internet we can all benefit from this form of communication.
View all posts by phil →
This entry was posted in Sports. Bookmark the permalink.