On our family vacation to San Diego, we visited friends in the heavily Filipino city of Chula Vista.  To my surprise, one of my friend’s sons was studying for his Filipino quiz the next day!  I blogged about language retention and Filipinos before as have others.  While I have complained about the lack of Filipino Language classes,  Otay Ranch High School apparently has done something about it.  This school has enough years of Filipino classes available to fill the University of California subject requirements.  Impressive.  Not a huge number of high schools offer Chinese or Japanese, which would have wider appeal, but in addition  to Japanese, this one offers Filipino.  I’d say that it is becoming useful as a diaspora language – I know I have heard it spoken in different parts of the world as Filipino immigrants and Overseas Foreign Workers are now all over the globe. 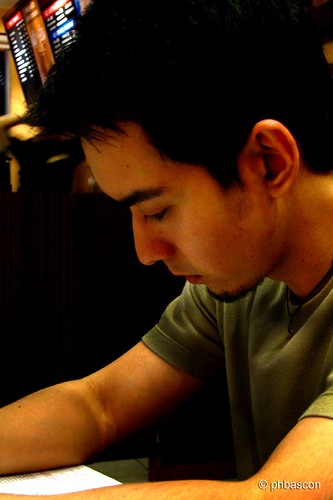 One of the reasons that there are many Filipinos in the San Diego area is the heavy Navy presence there.  For a long time, Filipinos nationals could directly join the US Navy, and that is how my father came to the US.  Despite their numbers in the area, I didn’t think that Filipinos would have the political clout to do things like get Filipino language classes instituted, so this was a pleasant surprise.  There have been some issues with credentials for Filipino Teachers, but since the classes are still going on, it would seem that that they have been solved.  Other San Diego high schools like Rancho Bernardo also have Filipino as an language option.

It was both interesting and fun taking look at the kid’s Filipino lessons.   Note that Filipino is not the same as Tagalog, as there are some differences.  Our friend’s son was trying to remember common phrases, which I found to be extremely polite.  My comment to his dad was that The Wife would never talk to me like that.  To ask for  a drink of water, the lesson said “Puwede bang uminom ng tubig?” which is literally “Is it okay to drink water?”  The Wife would probably say to me “Tubig!  Bilasan mo!” which is, well, slightly less deferential!

Incidentally, if you want to learn Filipino, The Fililpino Channel has occasional lessons with their Filipino Ka Sabihin Mo segments, some of which are available online.  Another interesting point from the credentialing article is that despite the availability of Filipino classes, some Filipino parents don’t want their kids taking it!