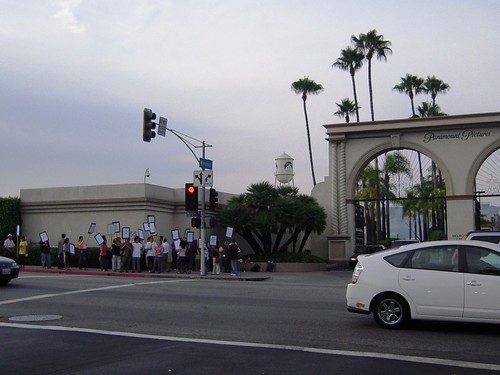 As reported by Angry Asian Man and also by 8Asians, various Asian American groups protested The Goods for its “Pearl Harbor” scene which depicts Ken Jeong’s character getting attacked by fellow auto salesmen for looking Japanese.

In addition to using this particular scene in the trailer, Paramount Pictures released an unapologetic statement:

“We understand that when presented out of context, jokes and situations in the movie about a variety of topics might be offensive to some people,” it said in a statement.

“To be very clear, ‘The Goods: Live Hard, Sell Hard’ is in no way meant to be mean-spirited, disparaging or hurtful to any individuals and we regret any offense taken,” it said.

In other words, “A hate crime can be funny in the right context!”

I’d like to excerpt Ken Narasaki’s letter to Sumner M. Redstone (Executive Chairman of the Board & Founder of Viacom, Inc., which owns Paramount):

I’m writing to protest the disgusting depiction of a hate crime-as-humor in the film, the television trailers, and the online ads for THE GOODS. I know, I know, everyone keeps saying that “it’s a joke,” “it’s satirical,” “the film is intentionally offensive to many different kinds of people,” but this is beyond hurt feelings and offended sensibilities – this is racist hatemongering disguised as humor. I’m assuming you’ve heard similar analogies, but I have to ask: If those white car salesmen had beaten up a Jewish salesman “for killing Christ”, and Jeremy Piven’s character egged them on by describing “the Kikes nailing our Savior to the cross”, would you expect your Jewish audience to just take it as a joke? Especially if your company ran the clip as part of its ADVERTISING on network TV? How about if Ken Jeong’s character was black and Jeremy Piven’s character urged the white salesmen to cover up their hate crime by saying he attacked them with a spear? Can you imagine your African American audience sitting still for that one?

…I have a personal incident to share with you: On December 7, 1991, the 50th anniversary of the bombing of Pearl Harbor, it was impossible not to see the footage of the bombing, playing over and over on all media outlets. Fair enough, it was the Day that will live in Infamy. It didn’t matter that my parents, grandparents, aunts and uncles were all put into concentration camps as a result; it didn’t matter that my father fought in Europe as part of the famed segregated Japanese American fighting unit, the 442nd: Someone decided to commemorate that day by throwing a brick through my front window. The brick and the glass landed on my then baby daughter’s changing table. Luckily for us, we were not at home at the time.

I’ve seen Paramount’s incredibly lame non-apology, and I, for one, am sick to death of Asian bashing masquerading as humor, and ask that you, in your capacity of Executive Chairman of Viacom, demand that this scene, which laughs at the very idea of hate crimes, be removed from the film and that Paramount Vantage issue a very real apology this time.

As I type this, MANAA and JACL, along with other community groups, are wrapping up the protest outside the front gates of Paramount Studios. When I stopped by about an hour ago to take some snapshots, Friday night traffic was at a peak and cars (including mine) honked their horns in support of the protesters.

jozjozjoz is a taiwanese-american gal who lives and blogs underneath the hollywood sign and who doesn’t clean her fishtank unless the fish starts to do the backstroke. she is also able to leap tall buildings in a single bound, but cannot stop from bumping into door handles, cabinet doors, and anything else that protrudes or has a sharp edge. she does not run with scissors for this same reason. she can pet the fur off a dog but don’t ask her to go anywhere near a horse. or a moth. or a roach. her dealings with L.A.’s finest (aka the parking violations department) are legend, as are her giant sneezes. Other than the two too many joz’s, jozjozjoz is a perfectly normal, relatively sane individual who defies the odds, reaches for the stars, and carries moonbeams home in a jar. She’d rather be a fish… but not in her own dirty fishtank. http://www.jozjozjoz.com
View all posts by jozjozjoz →
This entry was posted in (featured), Current Events, Entertainment, Movies, Southern California and tagged Entertainment, Movies, Paramount, racism, the goods, Vincent Chin. Bookmark the permalink.