Pediatrician Dr. Wolffe Nadoolman was puzzled by the symptoms shown by a 18 month old toddler of Asian descent.  The whites of the boy’s eyes were pink, yet there was no crusting or discharge that is typical of conjunctivitus (pink-eye).   He ran a low grade fever for five days.  What could the problem be?  As this New York Times article later reveals, the toddler had Kawasaki Disease. 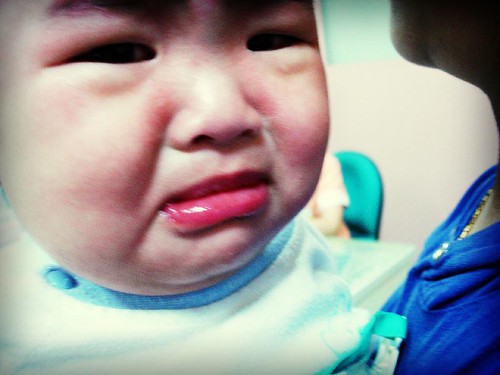 Kawasaki disease is an inflammation of the middle size arteries that occurs in children.  This inflammation can affect many areas, but the most serious and lasting problems happen in the heart’s arteries, where aneurysms can lead to heart attacks, even in young children.  Common symptoms are a prolonged fever with pink eyes or pink lips, such as shown by this baby.  It most commonly occurs in children of Japanese descent.  Most children completely recover from the disease, which is treated with aspirin and Gamma Globulin.  Long lasting complications, when they occur, are typically heart problems caused by damage to coronary arteries.

Oddly enough, while Kawasaki disease happens more often to those of Asian ancestry, Americans of all ethnic groups are getting it.  It tends to happen more in groups with higher socio-economic status.   John Travolta’s son Jett, who died earlier this year, had the disease when he was 15 months old.  There is some speculation that environment factors, such as carpet cleaners, are responsible for this increase, and there is also some theories that an infectious agent is responsible, as the disease often occurs in outbreaks and tends to be seasonal during late winter and early spring.