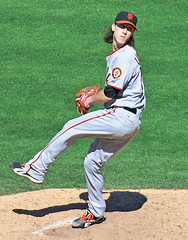 As San Francisco becomes overwhelmed with Giants and World Series fever — especially as they are now one game from winning their first World Series since moving from New York — I’ve begun reading news articles about start pitcher Tim Lincecum’s ethnic heritage from my fellow Filipinos. As it turns out, Lincecum’s mother is Filipina, according to this article from Bleacher Report back in February discussing both him and Manny Pacquiao, the Filipino sportsman most people identify as being, well, Filipino.

While it’s all well and good that we have another Filipino to claim as one of our own, I find it curious more among the Filipinos who are proudly declaring his heritage while for him and for other mixed Filipino Americans in sports such as Natalie Coughlin, their heritage isn’t something that they focus on. Maybe it’s because they look passably white that most people don’t look at them as being Filipino — most full-Filipino families don’t exactly push sports on their kids as a career path, but as something to pad their high school and/or college resumes, but given that Filipinos in the United States have high rates of cardiovascular disease and obesity relative to other Asian Americans as Genghis wrote a while back, one would think that these would be great role models for both health and sports in our community.

Efren is a 30-something queer Filipino American guy living in San Francisco. In the past, he was a wanna-be academic even teaching in Asian American studies at San Francisco State, a wanna-be queer rights and HIV activist, and he used to "blog" when that meant spewing one's college student angst using a text editor on a terminal screen to write in a BBS or usenet back in the early 90s. For all his railing against the model minority myth, he's realized he's done something only a few people can claim--getting into UCSF twice, once for a PhD program in medical sociology which he left; and then for pharmacy school, where he'll be a member of the class of '13. He apologizes profusely for setting the bar unintentionally high for his cousins. blog twitter
View all posts by Efren →
This entry was posted in Current Events, Sports. Bookmark the permalink.