Ask An Asian: How Do You Eat Sushi While Sympathizing With Japan? 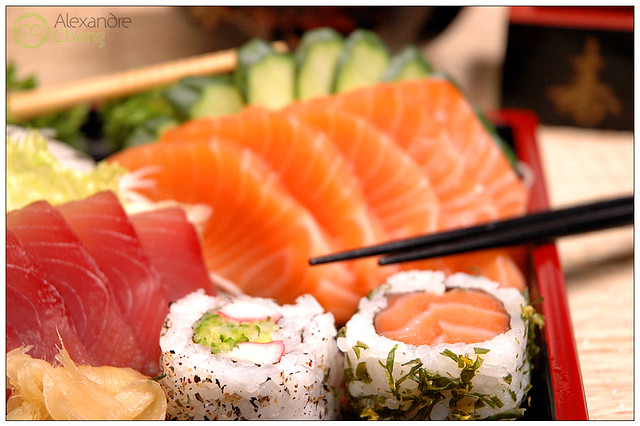 Every so often, we here at 8Asians get e-mails asking for advice. Sometimes we don’t but that doesn’t stop us from dispensing advice when and where it’s not requested. We’re pushy like that. We recently came across this Dear Prudence article that offered advice on how to properly show sympathy towards Japan’s recent disasters while eating sushi. Yeah. Here’s what we would respond with (if Prudence ever asks).

I was having lunch today at a Japanese restaurant, and I felt very insensitive enjoying my sushi without having a way to express my sympathy for the people of Japan over the recent earthquake and tsunami. I was at a loss as to how one might state that, though, without appearing rude or overstepping boundaries. After all, I didn’t want to act as if the people in the restaurant were more Japanese than American, but most were speaking Japanese to one another, so I’m betting more than a few have ongoing connections to the country. I felt that I was acting as an insulated American by not acknowledging the situation. What is the appropriate gesture at a time like this?

Read our advice after the cut.

I myself would go up to each better and apologize, bowing deeply, for the death and destruction of their people — or, of course, when you’re actually talking to them — YOUR people. Much like bowing where the lower the bow, the more respectful it is, the more “SOs” you say in “I’m SO sorry,” the more respectful you will be. Bee-tee-dubs, throw in some bows while you’re at it to be, like, triply respectful.

– Your friends at 8Asians

I think it’s great that you feel sympathy for all those affected by the disasters currently plaguing Japan, both here and abroad. (BTW- Have you donated to any one of the organizations collecting funds for relief efforts? I would start there.)

I am however deeply concerned about the insolence you feel towards yourself and your overt self-awareness that no one really seems to be caring when they’re serving you sushi. Really, they most likely already think of you as an insolent American and there is no way to change that – at least at this point. Their only concern is that you enjoy your meal, pay the check, tip well and be on your merry way to make space for the next customer to serve.

Thank you so much for your deep concern over the plight of the Japanese victims affected by the earthquake and tsunami. Your consideration is extremely relevant due to the little known fact that each piece of spicy tuna dragon roll (drenched with eel sauce) was caught, hand selected and prepared by the citizens of the Sendai prefecture. Without their cultural expertise in making iconic cultural foods like artificial crab stuffed California rolls, the sushi we Americans enjoy today across the nation in Korean owned restaurants would not exist.

As a result, the recent disaster has led to an extreme shortage of sushi, leaving thousands of people in Japan starving without their daily supplements of raw fish, soy sauce and wasabi. We are honored by your sympathy towards this horrendous situation and suggest that to help the ongoing relief effort, the best action you can take is to forgo any future plans to eat sushi in order to leave enough food for the Japanese survivors.

The Montagnards who own this restaurant thank you for your concern. Would you like a green tea flavored mochi ice cream for dessert?

So, readers, what would your advice be?

Thanks for rating this! Now tell the world how you feel - Share this on Twitter and on Facebook.
(Nah, it's cool; just take me back.)
MOODTHINGY
How does this post make you feel?
This entry was posted in Ask an Asian, Food & Drink, Observations. Bookmark the permalink.