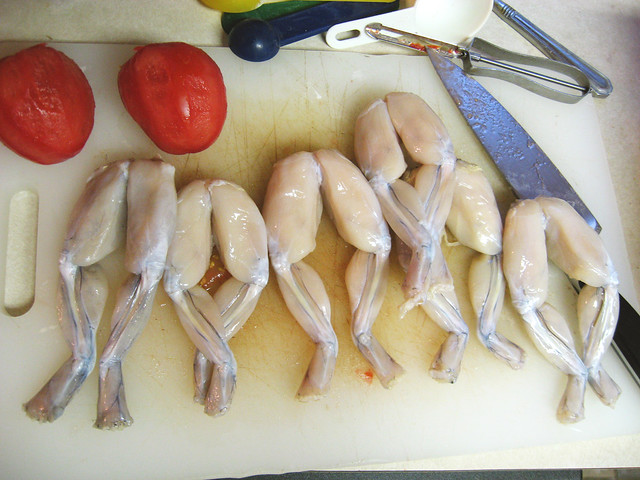 A Scientific American blog post points to a study, “Canapés to Extinction: The International Trade in Frogs’ Legs and Its Ecological Impact” (pdf) from conservation groups Pro Wildlife, Defenders of Wildlife, and the Animal Welfare Institute, that states that Asian American appetite for frog legs are contributing to frog extinction.  Asian American markets are said to import 2,216 metric tons of live frogs a year in addition to the 2280 metric tons of frog legs imported into the US.  This is less than the 4600 metric tons imported into the European Union.  This demand affects frog populations in two ways, through over-harvesting of wild frogs and spreading of the chytrid fungus (Batrachochytrium dendrobatidis), which has been cited as causing 100 amphibian extinctions globally.

While I’ve had frog legs a few times in my mostly Asian neighborhood, but it is not something I would really miss if giving it up would help ward off extinctions.   Most wild frogs are taken from Indonesia, and frogs are farmed in China, Vietnam, Taiwan, and Mexico for export.