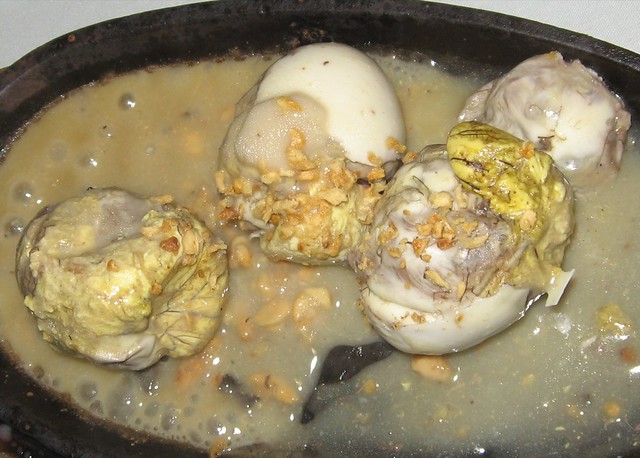 From the Atlantic Wire comes a report that a new Filipino restaurant in New York City, Maharlika, is offering the infamous delicacy balut, the boiled slightly developed duck egg. To his credit, Adam Martin, the author of the piece sums it up precisely: “[it’s] the embryonic egg dish popular in the Philippines and elsewhere in Southeast Asia but reviled pretty much everywhere else.” Curiously, he also states that it’s impossible to find in the US, though I’ve seen it since I was a little kid 30+ years ago growing up in the San Francisco South Bay in various Southeast Asian and Asian groceries.

As an otherwise proud 2nd generation Filipino American, there is NO FRICKIN’ WAY in hell you will ever get me to eat one of those things. My dad made the mistake of showing one to me as he ate it when I was about 6, and I pretty much crapped in my pants, since no 6 year-old American kid ever wants to see a half-eaten baby duck in its eggshell.

Of course now, with all the new Filipino restaurants that are opening up all over the country, people are trying to make balut classy. The Intramuros in South SF had balut baked in puff pastry on their appetizer menu years ago. Thankfully, it’s been taken off. That being said, Maharlika’s menu looks pretty interesting, and I wish them all the best. You still won’t get me to eat balut. Ever.

Efren is a 30-something queer Filipino American guy living in San Francisco. In the past, he was a wanna-be academic even teaching in Asian American studies at San Francisco State, a wanna-be queer rights and HIV activist, and he used to "blog" when that meant spewing one's college student angst using a text editor on a terminal screen to write in a BBS or usenet back in the early 90s. For all his railing against the model minority myth, he's realized he's done something only a few people can claim--getting into UCSF twice, once for a PhD program in medical sociology which he left; and then for pharmacy school, where he'll be a member of the class of '13. He apologizes profusely for setting the bar unintentionally high for his cousins. blog twitter
View all posts by Efren →
This entry was posted in Food & Drink, New York. Bookmark the permalink.