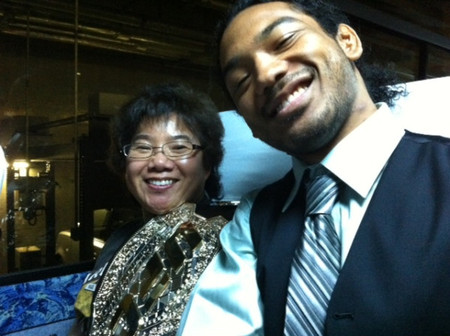 I have written about a number of Asians Americans in Mixed Martial Arts (MMA), such as Mark Munoz and Nam Phan. One that I haven’t talked about is Ben “Smooth” Henderson, who won the UFC lightweight championship at UFC 144 in Japan on February 25 by defeating Frankie Edgar in a controversially close decision. Here he is with his mom, who is holding his championship belt.

In many ways, Henderson epitomizes the “mixed” in MMA, as he was an All American NAIA college wrestler, a taekwondo practitioner, and is currently a brown belt in jiu jitsu. He received a bronze medal in the brown belt category of the world 2011 jiu jitsu championships and is adept at putting on submissions and fighting them off. Henderson is an amazing physical specimen, who managed to fight on after receiving a devastating kick to the head by Anthony Pettis.  In the picture above, he hardly looks like someone who was in a five round cage match.

Henderson reminds me in some ways of Hines Ward and Jeremy Lin. Like Hines Ward, he his half Korean and half African American, and projects himself as a generally affable, non trash talking person. Like Jeremy Lin, he isn’t shy about his Christian beliefs, which seem somewhat incompatible with his job to beat people to a pulp or choke them into submission or unconsciousness.   He is also fairly well educated, with a double major in sociology and criminal justice. He had gotten job offers to become a policeman, but decided to try MMA, figuring he could always fall back on police work if that didn’t work out.  His mom was initially not happy with that career decision.

It will be interesting to see how long he can defend his belt, especially with the wealth of extremely tough lightweights in the UFC.  In any case, this two time “Fight of the Night” winner is great to watch, as his fights are rarely boring.  Plus, he is now making his mom happy!