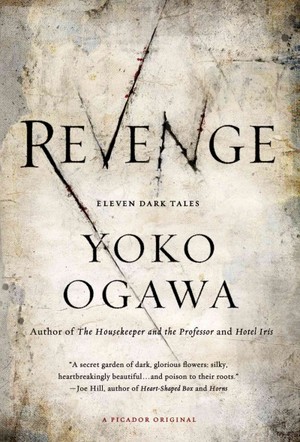 Rarely do I pick up a book so engrossing that I realize that no matter how tired I am, I am compelled to read “just one more chapter” before I realize that I have come to the end of the book and finished it in one sitting, much like the first time I read Ender’s Game. Yoko Ogawa’s Revenge, a collection of loosely linked short stories, is one of those books.

Revenge is a series of vignettes which all show the little dark corners of the disturbed minds that live amongst us, affected by something and led to commit something more sinister and equally macabre. The chapters are all connected in one way or another by characters who appear briefly in one story that become leads in the next, and events that happen in one that impact the next story. Think of people born with their hearts outside of their chests whose conditions mesmerize the inner lunatic in others, vegetables that look like human hands, and torture museums.

But there is no main story to speak of, just a study in the madness of people’s hearts in a world of terror so gripping that it’s sexual.

Drawing us further into it is the use of the first person to narrate each chapter, which probably could be likened more to vignettes and studies in madness.

To really get a good analogue of the strange and surreal minds of the narrators of each story, the absence of proper names making a reader feel like the character could indeed be him or her in the skin of each character, talking about Mother, Father, Sister, My Doctor, and the like. As you trudge through the swamps and miserable mires that are the stories in this collection, you begin to wonder about the people around you, when seemingly mundane individuals and some of their idiosyncrasies may be hiding something far more sinister.

For those who want a few parallels to demonstrate the collage of the strange, wonderful, and absurd that makes up Revenge, think of H.P. Lovecraft’s writing, the films of Jan Svankmajer, Haruki Murakami’s surreal short stories and novels (especially Kafka on the Shore), the music of Autechre, the music videos of Michel Gondry, and the art of Zdzisław Beksiński. If after taking in the assault on your sanity from all of these references here you thoroughly enjoy all of that, take a walk down the dark corridor of your heart and prepare for a strange and seductive read with Yoko Ogawa’s Revenge.

Johnny C is a self-described Accidental Asian American: born in California and raised in Hong Kong and Manila, he spends his days traveling as a freelancer for various NGOs in development and human rights. An idealist and adventurer, his travels are both for work and fun, while sharing stories through his pictures, videos, and writing. When he's not dance-walking to indie rock songs on his iPod in cities around the world, he's usually got himself engrossed in a science fiction novel traversing the portals of reality.
View all posts by JohnnyC →
This entry was posted in Books, Entertainment and tagged asian books, book review, japanese author, Literature, revenge, yoko ogawa. Bookmark the permalink.