As if it weren’t awesome enough that we’re going to have a major showdown between Karate Hottie Michelle Waterson and Yasuko Tamada from Japan in Invicta 8, We were supposed to get another fight card featuring another run for the title between a major bout between two Asian American female MMA fighters, Jenny Liou Shriver and Katie Howard. Unfortunately, Howard was injured and had to pull out of the fight, but hopefully this fight is scheduled again for when the two of them are ready to rumble. 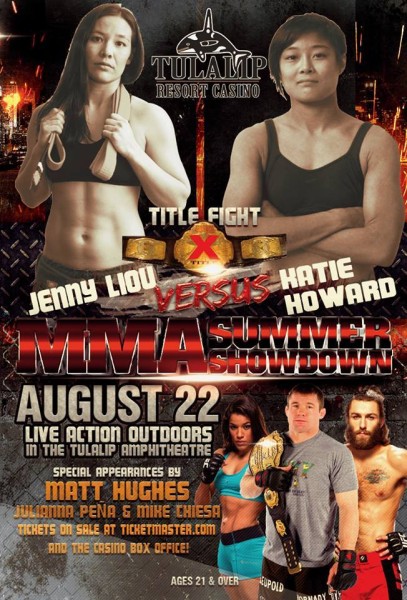 Shriver was a top hopeful for Ultimate Fighting Championship’s (UFC) The Ultimate Fighter (TUF) reality TV show, season 20, and she made it as the first alternative despite competing against many other fighters who had much longer pro records. She fights out of Lewiston, Idaho with a pro record of 2 wins and 0 losses.

Howard fights out of Portland, Oregon with five pro fights under her belt, 3 wins, and 2 losses. I only just discovered Howard through this bout with Shriver, so I checked out the Youtube of one of Howard’s fights, and it looks like she may have a preference for ground game based on the outcome of that fight. Shriver, too, works from a BJJ foundation, but since she’s been winning with TKOs, it’s safe to assume she’s been working on her stand up game.

So will these two ladies be taking each other out with joint-ripping submissions on the ground or will the preference on both sides for ground game lead to a stand up battle? I’ll keeping tabs on whether or not the fight will be scheduled again later.

Tinabot is a writer, teacher, and ninja. She and her students write and publish their work. Her debut teen kung fu romance novel The Legend of Phoenix Mountain is available on Amazon and Barnes & Noble.
View all posts by tinabot →
This entry was posted in Sports. Bookmark the permalink.