Like in 2012 in Charlotte, there was an AAPI community get together, in the form of theĀ Philadelphia AAPI Community Luncheon:Ā “The Philadelphia AAPI Network welcomes DNC AAPI Caucus members, AAPI delegates and guests to a complimentary DNC Dim Sum lunch in honor of our Congressional APA Caucus (CAPAC) Members”Ā Coincidentally, the hashtag for the event was #DemSum (get it?) The luncheon was held in Philly’s Chinatown at Ocean City Restaurant (which was very close to the Pennsylvania Convention Center)Ā on Tuesday, July 26th from 12:30-2:30/3:00PM. This fell in between any of the morning meetings at the convention center andĀ before the delegates made their way to the Wells Fargo Center for the official evening proceedings (which was almost 7 miles away via bus shuttles or the subway).

The goal of the luncheon was to “highlight the Philadelphia region’s strong and diverse local AAPI community and continue to build a dialogue with our national representatives about our efforts and priority issues.” But essentially, the event was mostly a lot of prominent elected AAPI official and community leaders a platform to speak and also to network.

At the luncheon, I saw again – whom I had met four years ago at the same type of gathering, former Cabinet Secretary Chris Lu, who is now theĀ Deputy Secretary of Labor. Unfortunately, I didn’t get a chance to interview Lu again since he had a pretty tight schedule. I sawĀ William Tong, Connecticut House of Representatives from the 147th district – the last time I saw Tong, it was at a fundraiser in San Francisco when he was running for Senator of Connecticut. William Tong, Connecticut House of Representatives from the 147th district

Also, I had bumped into Eric Blyer, a former filmmaker I had met back around 2003 – 2004 when his film, Charlotte Sometimes debuted and had a screening in San Francisco. We’re “friends” on Facebook and had seen his posts here and there but didn’t exactly know what he was up to now. Eric now works for The Young Turks, which I had heard of, but didn’t know much about it exactly. I don’t think Eric remembered me or anything, but it was just kind of cool at least for me to see a familiar face from the past, especially an Asian American filmmaker I supported by viewing his film and buying a DVD of it.

There was also a handout for the attendees – “The Ultimate DNC Scavenger Hunt for AAPIs” which I’m sure no one had the time to do … but the other side of the handout had a nice “The Ultimate AAPI Food GuideĀ to Philadelphia.” Too bad I didn’t have a chance to check out too many restaurants in Philly – but I did have an official Philly cheesesteak at Pat’s.

Additional photos of the event: 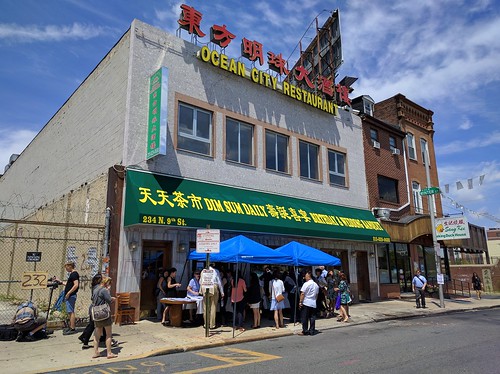