Does this mean I can also blame Confucius for my bum knee? 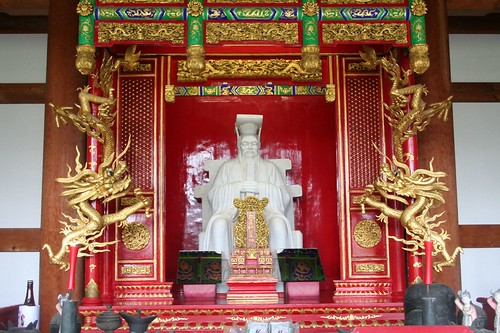 This LA Times article about the Korean-American communities rethinking of achievement strikes me in a funny sort of way…and not good funny. The article asserts that, in the shadow of a few very public f-ups by a handful of Korean-Americans, the community is rethinking whether the stress generated by the struggle for academic and financial achievement is worth the toll it takes on individual members of the community.

“Other parents told me I am not a good parent — many, many times,” said Chang, 51. His perceived sin: not putting his daughter through a regimen of cram school and tutoring aimed at gaining admission to a prestigious university. But in two decades of teaching, Chang said he has seen too many kids become withdrawn or depressed because they could not meet their parents’ lofty expectations.

I don’t have a problem with the premise of the question being posed in the article, per say, but I do find fault with the journalist’s use of Seung-Hui Cho (of Virginia Tech mass murder fame) as an emblem for the extreme negative consequences of cultural pressure.

The journalist then goes on to cite Confucius as the reason Korean-American kids are passive and aren’t willing to speak up.

“If you are passive,” he continued, “getting A’s doesn’t mean anything.” What matters is articulating thoughts, taking the risk to communicate them, he said. “Silence is not a virtue.” Still, hardly any response — at least not in front of Chang. He had an explanation for their reticence.“It’s your Confucian upbringing,” he said.

Okay, while there may be some validity in this last statement it really seems rather ambitious to blame Confucius for all the ills of an entire sub-group of people. Basically, the journalist and the sociologist are asserting that Confucius has more impact on Korean-American kids then MTV, their friends, and American culture at large.

That’s like me blaming Confucius for my bum knee because he once said self-mastery was a virtue and all that marathon training was my way of achieving self-mastery. Hmmmm… actually that’s not half bad. That’s much more interesting than telling people I blew out my knee over-training.

What do you think? Does this article ring true for you or is it way to much of an overstatement?

A 30something, 1.5 generation Korean-American/New Yorker who spends her day as an HR exec. specializing in corporate diversity & inclusion. I get to think about ways to make "The Man" less male, white, and straight. It's the best job in the world! When I'm not trying to change corporate America, I teach yoga and dabble in holistic health counseling. I have an MBA from New York University Stern School of Business and my undergraduate from the University of Michigan. Lesser known facts about me: I enjoy b&w film photography, training for endurance races, and making homemade jam. Other mindless observations can be found at http://itsbo.blogspot.com/
View all posts by Bo →
This entry was posted in Discrimination, WTF. Bookmark the permalink.