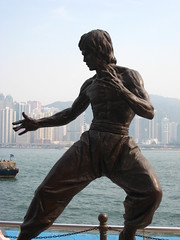 I remember running home from grade school to watch Fist of Fury, Way of the Dragon, and Game of Death as a kid. Then I’d daydream about being a kung fu master and practice my moves on my little brother. Hwah! Hwah! Hwaaah!

Bruce Lee would be 67 years old today. He was born in San Francisco, CA, then raised in Hong Kong, where he learned Chinese martial arts and started making Hong Kong martial arts films.

He also attended the University of Washington from 1960-1963, where he majored in drama major and took some philosophy classes, while working at Ruby Chow’s restaurant (on Broadway and Jefferson). It was here that he met his future wife, Linda Emery.

The students of UW are holding a rally to support a Bruce Lee memorial today, from Noon-1:00pm on the campus’ Red Square. The memorial would include a statue of Bruce Lee, which “could potentially be the best statue ever.” Heh. (BTW, the photo featured here is the statue of Bruce Lee in Hong Kong).

I wasn’t able to find any celebratory events for Bruce Lee in San Francisco though. So in lieu of that, here’s my birthday song to the master:

Happy birthday to you,
You have awesome kung fu,
You totally kicked Chuck Norris’ ass,
And Kareem Abdul-Jabbar’s too!

I'm an idealistic realist, humanistic technologist & constant student. And what, you want to Internet-stalk me too? Why, sure.
View all posts by Mike →
This entry was posted in Current Events, Sports. Bookmark the permalink.