Should Asian Americans support English as the only language? 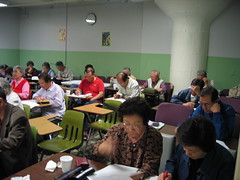 It’s interesting that this topic is coming up left and right in the political realm right now due to the amount of immigrants that have migrated to the United States. While the current topic seems to surround the Latino community and Pajamas Media has a great article on why supporting bilingualism could hurt more than help, it is interesting to take this topic to our own community to see where it stands.

Myself, I know where I stand. But let me put my perspective into context. What’s interesting is that in growing up in a very Asian-rich environment, I never did see Home Depot write anything in Chinese. Ever. ESL students had to struggle by themselves in classes since there was no help from people that spoke Mandarin or the like unless there happened to be students of the same cultural backgrounds. Heck, one of my good friends growing up moved here from Taiwan in fifth grade and spoke practically perfect English in high school.

However, there is a lot of argument for actually having multiple language translations and teaching people in their native language. It is easier to learn, for those that are actually trying to learn. But then if you give them a way out of learning the language by offering it to them in their native tongue, then what incentive is there to actually learn the language itself?

From my personal experiences, I remember that my Spanish teacher in high school for second year Spanish told us that he would be teaching us in full Spanish and no English at all. Talk about total immersion. If that didn’t force you to pay attention, you would never get anywhere. I also have found that those of us (Asian Americans) that emigrated usually fought, bit, clawed our way through learning the language of the land of the free and home of the brave. They didn’t get any break, so no really sure why anyone else should be. It only made all of us stronger, learn English better, and assimilate into the Western culture easier.

Yet, is this how we should move forward? Perhaps not.

Ben Hwang is involved in a number of online publications and also writes at his personal blog, LUX.ET.UMBRA. When he's not in the middle of starting companies and dreaming up new ventures, he is heavily involved in local community efforts. Currently resides in North Carolina.
View all posts by Ben →
This entry was posted in Current Events, Observations, Politics and tagged Asian, English, language, support. Bookmark the permalink.