Merry Christmas to You, Happy Birthday To Us! 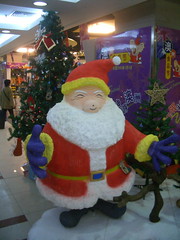 On behalf of everyone here at 8Asians.com, I’d like to wish you guys a very Merry Christmas, or whatever the hell you guys celebrate.

Oh, and another small footnote: 8Asians.com was pretty much started around a year ago today, to humble beginnings – basically sending out a couple of co-workers and friends if they were interested in starting a blog about “Asian American stuff.” One year and over 50,000 unique visitors and 150,000 hits to the website later, we’ve gotten mentions on Spiegel and Newsweek and have had our first in-person happy hour, not to mention our fair share of drama, whether it be from angry Asian Americans or angry Germans. Something to piss somebody off, right? Right.

I would publicly like to thank the 17 (!!!) other bloggers who have helped out with 8Asians.com, past and present – in particular, Mike and Genghis for the initial support during that fateful night in the work cafeteria, and Christine for joining forces with her fantastic podcast, POP 88. Finally, I would like to thank you, 8Asians.com reader, for making the site what it is today. Here’s to another year, whatever the hell it will bring.