The Parol, Our symbol for Christmas 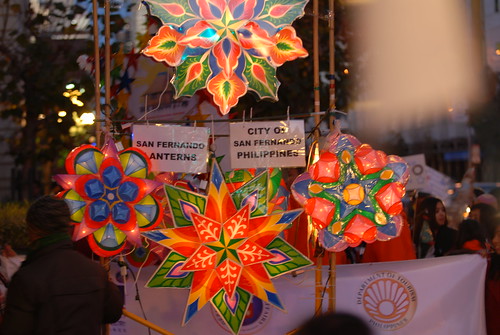 If you drive through a neighborhood at Christmas time and see a vibrant blinking star with many different colors; it’s a pretty safe bet that you’ve just passed a Filipino home. Christmas in the Philippines and practically everywhere else in the southern hemisphere celebrates the holiday in the middle of summer. So what do you do when Firs and Pine trees aren’t covered in white snow? Celebrate with Parols! It’s a Filipino tradition to create stars out of bamboo and tissue paper, lit with tiny lights. The Parols is the Filipino version of a 9ft Noble fir decked out in holiday trim. The Chronicle’s Michelle Louie wrote an article a few weeks back highlighting the history and tradition of this cultural symbol.

The Philippines is a nation that is 85 percent Catholic. Invaded by Spain hundreds of years ago, the indigenous people of the Philippines were converted to Christianity by Catholic missionaries. The missionaries used the parol as a symbol to distinguish Christian’s from Non-Christians, and as a means to convert non-believers. However this symbol was also taken by the resistance movement against Spanish colonization. The resistance movement or Katipunan, took the symbol as a fight for freedom against Spanish oppression and rule.

But there was also a resistance movement known as the Katipunan that fought to rid the Philippines of Spanish rule. Founded in 1892, this brotherhood inducted new members in a blindfolded, candle-lit, blood-signing ceremony that was held in a cave.

“When you opened your blindfold, you were blinded by the one light,” Canlas says. “You were committed to fighting for this light.”

The Bayanihan Community Center off of 6th and Mission in San Francisco, hosted their fifth annual Parol Lantern Festival. People from all walks of life joined the parade, creating their own stars. Some from recycled materials like aluminum cans, others creating stars as large as10 foot Christmas trees. I was able to take a few photos as they marched down Market St., sharing their holiday spirit with shoppers and onlookers.

On Christmas Eve, my sister-in-law brought bamboo sticks with different colored tissue paper. We spent the time after dinner, creating our own stars. We laughed together as we cut and pasted tissue paper on bamboo sticks, creating our own personalized stars. A friendly competition emerged as to who could create the best looking star. Here are a few of them that we created as a family.

The parol is our symbol of Christmas. The star signifies the coming of the Christmas season and the birth of Christ. It was the symbol the three wisemen used to find Jesus Christ in Bethlehem. It was once a symbol used to mark those who were non-believers. It was also a symbol used to inspire people to freedom against their oppressors. It is a symbol that brings community together in song and march. It is a tradition of belief and faith, love and hope. But now it means more to me than paper and bamboo. It’s a symbol of how my Christmas was spent with my family, sharing, laughing and loving the holiday spirit, as we spent time making parols together. The parol is my symbol of Christmas.

My name is Genghis Mendoza, named after a mongolian barbarian, but 100 percent Filipino. Also the darkest one in this here bunch. But don't let the black and white photo fool you.
View all posts by genghis →
This entry was posted in Lifestyles. Bookmark the permalink.