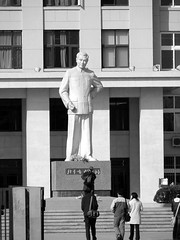 Tiananmen Square all over again? Not quite.

But after a bicyclist going the same direction as a vehicle collided, the driver demanded not only an apology but also payment including insulting the bicyclist. After having a few choice words and students gathering, there was an interesting commotion that strangely enough ended up with the car being overturned and the windows smashed out by the students.

While the story seems to eeriely ended on good terms for the students, I must say that it seems that the fault does lie within both parties. I also wonder if the lady was someone from the government? No one would flaunt their identification so rashly and tell people that they should be “scared to death.” And with the chancellor of the University promising that the students would not pursued for the acts of protest and that the instigator would be pursued to the extent of the law, you sort of wonder where the fault actually lies.

Good for them to stand up for their own and demand why the driver didn’t have a permit to drive upon campus. While it could have been handled in a more peaceful manner, it’s also very enlightening that the chancellor stood by the students instead of the outsider.

Ben Hwang is involved in a number of online publications and also writes at his personal blog, LUX.ET.UMBRA. When he's not in the middle of starting companies and dreaming up new ventures, he is heavily involved in local community efforts. Currently resides in North Carolina.
View all posts by Ben →
This entry was posted in Current Events and tagged , bicyclist, government, Nankai, students, traffic, university. Bookmark the permalink.