If takeout Chinese food were like gas prices today 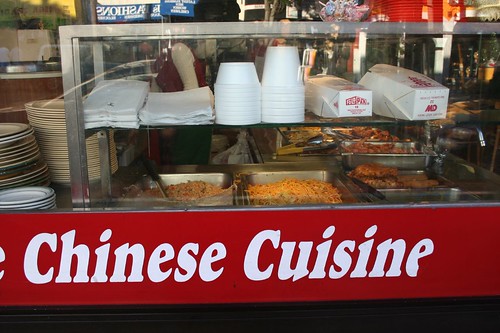 American Chinese take-out is a luxury that most of us have had the chance to try. In fact it’s what most Americans look towards as a fun little night out. But no more!

Yes, Chinese takeout places around the nation are now depending on one single organization to dictate pricing : The Chinese Food Organization of America. While they have the supplies to provide the increased production of take-out foods, they’ve decided to limit the intake of won ton wrappers. This has caused pricing of Chinese takeout to soar above the usual prices.

It used to be that you could get more food than your whole family could eat for a Jackson. No more. Since the holding back of won ton wrappers, trading of the wrappers have pushed the price up beyond what the middle-class can afford. Many Americans are having to give up their duck sauce and soy sauce individual packages due to increases. In fact, restaurants are now forgoing single individual plastic packets and are charging you $5USD to for one dip of your chopsticks into a vat of soy sauce to drizzle on your food. Chopsticks are also now being made 75% the size of what the regular size used to be and charged at $1USD a pair.

As many people are still paying the increased pricing of General Tso’s Chicken and there are some that are combatting this tragic food event by introducing alternatives such as Mrs. Wong’s fried rice and a soy sauce substitute called Mr. Chan’s soy subbyTM (more fondly known by fans as SS). There is another movement that is gaining force to move takeout food arena to Japanese food, but it’s slow rolling and thought to cost a lot in development costs before we actually see progress in this area.

There are also isolated reports of food prices going up as waiters in a small town Chinese restaurant in Arkansas were contemplating showing up to work five minutes late on a Friday afternoon. Wall Street just couldn’t handle that, and won ton wrapper prices shot into an all-time high.

Lest we forget, there are forums popping up all over the Internet on how they were told one price over the phone when ordering but in the course of an hour, the total cost of the food went up by almost 20% due to the delivery boys having a slight air leak which drove delivery costs up and trickled down to the consumer.

While none of the above is true, it’s interesting how a few individuals can effect the economics of the masses. And if American-Chinese cuisine ever organizes? Look out. I for one will be giving up my addiction for takeout spring rolls.

Ben Hwang is involved in a number of online publications and also writes at his personal blog, LUX.ET.UMBRA. When he's not in the middle of starting companies and dreaming up new ventures, he is heavily involved in local community efforts. Currently resides in North Carolina.
View all posts by Ben →
This entry was posted in WTF and tagged chinese, gas, satire, takeout. Bookmark the permalink.