In defense of “Real” Americans 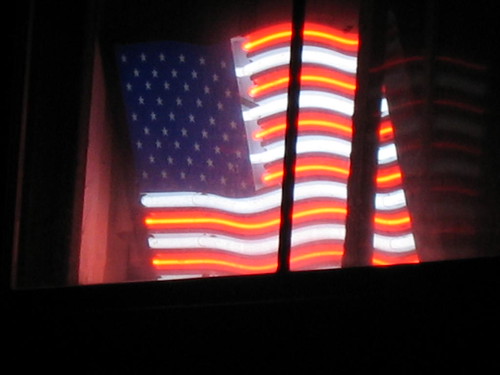 The McPalin camp has been doing a pretty good job of driving a big race/class wedge in America over the past several weeks. Palin, in particular, has been doing all she can to fan the flames of intolerance as she draws a clear line between “real” Americans and inauthentic Americans, pro-Americans and anti-America Americans.

If a person were to seriously believe the hateful rhetoric of McPalin, you’d believe that “real” Americans only exist in small towns somewhere far from either of the coasts. You know, us non-white folks living on the coasts who have never ridden on a tracker trailer or wrestled a moose with our own bare hands or worn a trucker hat without a bit of irony – McPalin would have us believe that we’re not real Americans. In the republican world, there is no way that us university educated, media and technology obsessed, secular, children of immigrants can possibly be just as patriotic or pro-American as our more rural counterparts.

This is what I have to say to all those arbiters of “Real” America propaganda: TAKE YOUR HATEFUL BS AND SHOVE IT WHERE THE SUN DON’T SHINE.

You want to know what “Real” Americans look like?

I’m a real American. I may not look like the folks attending McPalin events in Ohio or Colorado…but I look a heck of a lot like the future of America – whether they like it or not.

A 30something, 1.5 generation Korean-American/New Yorker who spends her day as an HR exec. specializing in corporate diversity & inclusion. I get to think about ways to make "The Man" less male, white, and straight. It's the best job in the world! When I'm not trying to change corporate America, I teach yoga and dabble in holistic health counseling. I have an MBA from New York University Stern School of Business and my undergraduate from the University of Michigan. Lesser known facts about me: I enjoy b&w film photography, training for endurance races, and making homemade jam. Other mindless observations can be found at http://itsbo.blogspot.com/
View all posts by Bo →
This entry was posted in Observations, Politics. Bookmark the permalink.