The 8Asians Writers Talk About: Asians and Jerky Products 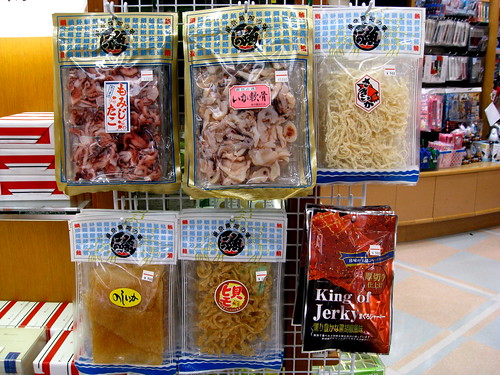 Our internal e-mail lists have us discussing all kinds of stuff: Asian American identity, representation in the media, the experiences of activism in an academia setting and its progression as we transition to the working, adult world. And sometimes, we talk about jerky products.

“My name is Douglas Patrick Iske and I am the President of Jerky.com. Jerky.com features the widest selection of U.S. made jerky products and meat snacks anywhere in the World! A significant percentage of our customer base is Asian-American, so we are always looking for new ways to reach Asian American Jerky enthusiasts. This is what has brought me to you.”

Ernie: Do Asians really LOVE jerky? Seriously? I’ve never been a fan; does that make me a sell-out?)
Efren: I’m not a big fan of jerky (except maybe Filipino tapa), but I am curious to try soy jerky.
Ernie: For everyone that is interested in getting jerky, please e-mail me (off the mailing list) with your personal e-mail address. I’ll make sure jerky samples get sent. (“Getting jerky.” Ha ha.)
Jeff: Jerky is okay. For some reason, Number One son really likes it.
Joz: I’ll bite… I love jerky! And yes, Asians DO love jerky. You know, like squid jerky.
Joz: I wonder if jerky.com has any “Asian” jerkies. Like that yummy/shiny sweet pork kind or the 5-spice kind. Or even that dried squid stuff (does that count as jerky?) Actually, in a brief look at jerky.com, it’s very “American” jerky. Doesn’t really appeal to me at first glance. I’d rather order from a site like this, (excluding the chinky Chinese font, yes, the Chinese actually looks chinky, if that makes any sense.)
Efren: Hmm… I’ve never considered Asian dried meat to be “jerky” though I guess technically they are. The Chinese and Vietnamese dried meat seems to be a lot moister so I’ve never considered it to be “jerky” since I always considered American style jerky to be chewier and drier (and totally unappetizing).
Efren: And the “chinky” font is REALLY annoying. Thank God I live right near Clement Street so I can get that stuff directly (and lop cheung, etc.) without having to go through annoying sites like that.
Moye: Now that I think about it, my family really loves beef jerky, including me. It’s like the dried squid snacks we’d eat with beer and edamame. But I can’t think any of my non-Asian friends who appreciate it as much as we do. Can someone make a Venn Diagram where the Asian population and hicks overlap with beef jerky?
Xxxtine: I so don’t want to be at work right now:

Asians and jerky products: do we find them just as delicious as NASCAR fans? “Dried meat” just reminds me pork sung, which makes me gag, personally. Your opinion may differ. Discuss.

Thanks for rating this! Now tell the world how you feel - Share this on Twitter and on Facebook.
(Nah, it's cool; just take me back.)
MOODTHINGY
How does this post make you feel?
This entry was posted in Food & Drink, TalkAbout. Bookmark the permalink.