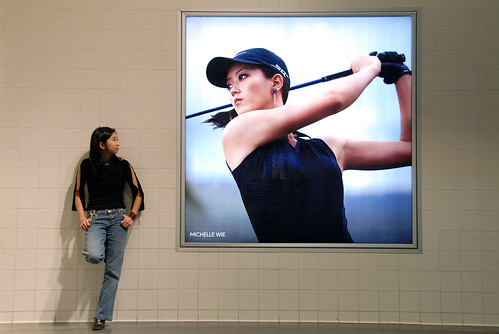 If you haven’t heard much of nineteen year old Korean American female golfer Michelle Wie in the news lately, it’s because she’s been busy studying and practicing. The San Francisco Chronicle profiles Wie’s life as a student and athlete:

“Wie … now, fresh from earning full-time LPGA playing privileges at Qualifying School in December, she will return to her native Hawaii next week to play in her first event as a tour member… [her] life at Stanford follows a clear routine: She works out every morning at 8:30, attends classes from 10 until noon or 1 p.m. and then practices every afternoon.”

Apparently Wie also lives on-campus at Stanford, while her parents live off-campus but help manage her career. When Tiger Woods was at Stanford, he was not a nationally or internationally known athlete as he is today. Though Wie has yet to win any major titles, I have to imagine that it might be a bit tougher to maintain a “normal” student lifestyle for her relative to most Stanford students. Could you imagine what life for Chelsea Clinton at Stanford must have been like?