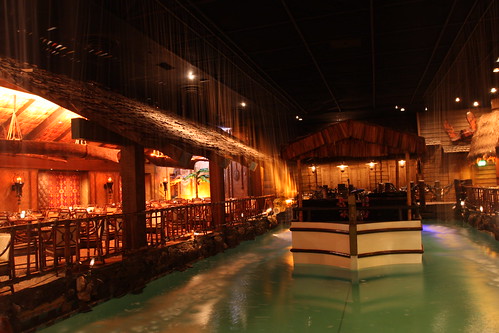 SFGate.com just announced that the Tonga Room in the Fairmont Hotel in San Francisco could possibly be closing soon as the hotel considers converting much of its space into condos (which in this economy doesn’t make much sense, but I digress).

While on the surface this may not have much to do with Asian Americans, the Tonga Room is one of the last vestiges of an era gone by for Asian American nightclub performers in San Francisco.  From the 1930s to the 70s, Chinatown in San Francisco was known as having nightly entertainment featuring “exotic” performers from the Orient, even though the vast majority of them were actually 2nd generation Chinese and Japanese American singers and dancers born in both the mainland and Hawaii.  This is probably best personified in the movie Flower Drum Song, which featured performers from Forbidden City, the best well known nightclub in Chinatown SF at the time. Arthur Dong did a critically acclaimed documentary on this nightclub called Forbidden City, USA and should definitely be watched if you’re truly interested in seeing how the stuff that Asian American performers dealt with back then hasn’t changed for those trying to make it into showbiz today.  A woman who performed during that era tries to bring that time back with her group of performers from those days called Grant Avenue Follies.

When I went to the Tonga Room a few years ago to celebrate a friend’s birthday, it featured a predominantly Asian American band playing covers of cheesy pop songs from the 50s to the 80s and portrayed a romanticized American version of the “Tropics” featuring supposedly  Asian fusion cuisine (which ended up being more like lots of deep fried wontons filled with cheese and crab and other deep fried monstrosities), strong and enormous cocktails, and decor from random Pacific Islands, which would horrify most people who have a basic sense of fashion design.  Think of Trader Vic’s on steroids.  What did strike me about the place (aside from the cocktails that gave me a nasty hangover the next day) was the fact that almost everyone working there was Asian American and that all of the performers knew that this was totally inauthentic cheese, but had fun with it and played it to the hilt.

Given that the opportunities for most Asian American performers during that time was virtually nil outside of doing these clubs, I did come away with a sense of appreciation that despite their exoticizing Asian and Pacific Island cultures, it allowed Asian American performers back in the day to practice their trade, so it is sad that with the Tonga Room closing, this era will come to an end.

Efren is a 30-something queer Filipino American guy living in San Francisco. In the past, he was a wanna-be academic even teaching in Asian American studies at San Francisco State, a wanna-be queer rights and HIV activist, and he used to "blog" when that meant spewing one's college student angst using a text editor on a terminal screen to write in a BBS or usenet back in the early 90s. For all his railing against the model minority myth, he's realized he's done something only a few people can claim--getting into UCSF twice, once for a PhD program in medical sociology which he left; and then for pharmacy school, where he'll be a member of the class of '13. He apologizes profusely for setting the bar unintentionally high for his cousins. blog twitter
View all posts by Efren →
This entry was posted in Entertainment, Observations. Bookmark the permalink.