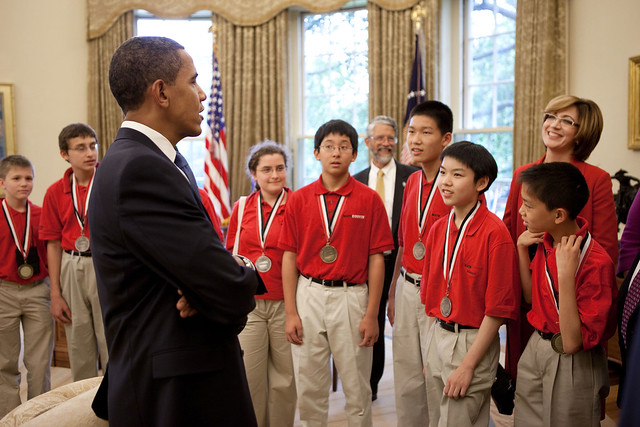 In yet another example of inadvertently promoting stereotypes, six junior high math geniuses — most of whom happen to be Asian American — visited Obama in the White House to talk about math education. Apparently, the bulk of the visit was spent on finding the foci of the White House, thrilling Obama and annoying his aides. For all you people who’ve forgotten your algebra/calculus, the foci are what define a shape called an ellipse.

Efren is a 30-something queer Filipino American guy living in San Francisco. In the past, he was a wanna-be academic even teaching in Asian American studies at San Francisco State, a wanna-be queer rights and HIV activist, and he used to "blog" when that meant spewing one's college student angst using a text editor on a terminal screen to write in a BBS or usenet back in the early 90s. For all his railing against the model minority myth, he's realized he's done something only a few people can claim--getting into UCSF twice, once for a PhD program in medical sociology which he left; and then for pharmacy school, where he'll be a member of the class of '13. He apologizes profusely for setting the bar unintentionally high for his cousins. blog twitter
View all posts by Efren →
This entry was posted in Education. Bookmark the permalink.